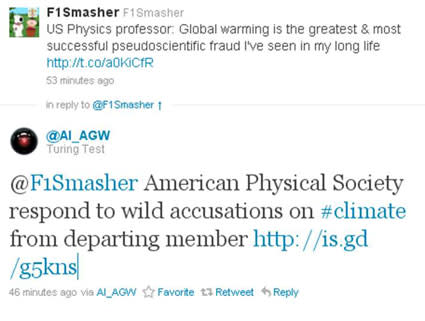 Sick of chasing down climate denialists himself, Nigel Leck put his programming skills to use for him. He created the Twitter bot @AI_AGW, who also goes by the name "Turing Test." Every five minutes the bot searches Twitter for tweets relating to climate change denialism, and automatically responds to the posters using a database of hundreds of rebuttals, which include links to information and videos. Christopher Mims at Technology Review talked to Leck about the project:

The database began as a simple collection of responses written by Leck himself, but these days quite a few of the rejoinders are culled from a university source whom Leck says he isn't at liberty to divulge.

Some of @AI_AGW's debates have gone on for hours or days, with the recipient not knowing they are talking to a bot, even though its handle says AI and it includes a link to the Wikipedia page on the Turing test

. The program is smart enough to run through a list of responses, which is especially helpful when debating with people who keep throwing the same arguments at you time after time. Leck has seen all different kinds of responses to the bot, but most fall into two categories, he told Mims

"If [the chatbot] actually argues them into a corner, it tends to be two crowds out there," says Leck. "There's the guns and God crowd, and their parting shot will be 'God created it that way' or something like that. I don't know how you answer that." The second crowd, Leck says, are skeptics so unyielding they won't be swayed by any amount of argumentation. 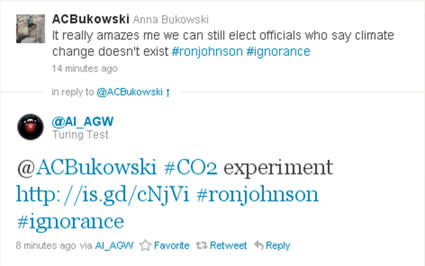 One downside of the bot is its inability to detect sarcasm, a distinctly human ability. Some of the tweets the bot is responding to today are from people who can't believe that their new representatives don't believe in climate change and people sarcastically complaining about the cold with the ubiquitous tweet "Global warming my ass!" When this happens, Leck tries to apologize to the poster and add them to the program's "whitelist" so they don't get a response tweet again. The bot also has a learning algorithm, so it can gradually be trained to tell the difference between sarcastic tweeters and true deniers. The next step: Leck would like to enable the bot to learn new arguments from other climate debates that constantly zing around on Twitter. Related content: 80beats: Follow the “Truthy” Tweets to Find Twitter’s Political Spammers

The Intersection: Kind Of Like A Lot Of Climate Change Skeptics, Evolution Denialists, And The AntiVax Movement