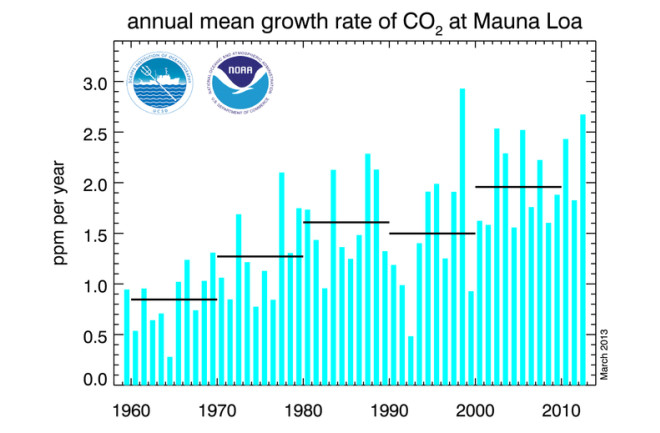 The annual mean growth rate in atmospheric carbon dioxide from 1959 through 2012, as measured atop Mauna Loa in Hawaii. (Graph: http://www.esrl.noaa.gov/gmd/ccgg/trends/) The graph above tells the tale: Last year, concentrations of heat-trapping carbon dioxide in the atmosphere jumped by the second highest amount since modern monitoring began in 1959. According to Pieter Tans, a National Oceanic and Atmospheric Administration scientist who leads the effort to track CO2 levels, the rise was driven mostly by increasing emissions of the greenhouse gas, thanks in large measure to more coal-burning power plants in the developing world. As reported by the Associated Press, Tans said the new findings suggest that the prospects for limiting average global warming to less than 2 degrees C over preindustrial levels are fading. Beyond that threshold, the odds of dangerous climatic impacts rise significantly, in the view of many scientists. The graph below charts the rise in CO2 in parts per million, as measured on Hawaii's Mauna Loa, since 2009:

Image: http://www.esrl.noaa.gov/gmd/ccgg/trends/ The dashed red line represents the monthly mean values. The oscillation results from the growth cycle of plants in the Northern Hemisphere (which has more landmass than the Southern Hemisphere, and thus more vegetation). The black line charts the rise in CO2 with the seasonal cycle removed.