Rotating and fracturing sea ice in the Beaufort Sea off the coast of Alaska and the Canadian Arctic archipelago, as seen in an animation of satellite images acquired between April 1 to 24, 2016. The northern coast of Alaska is towards the left of the frame. (Animation: National Snow and Ice Data Center. Images: NASA Worldview) The rampaging wildfire that blazed through the city of Fort McMurray in Alberta, destroying an estimated 1,600 homes, will likely continue burning for months to come.

This should come as no surprise, given the astonishing warmth that has gripped most of Earth's northern reaches for months on end. That warmth means the Canadian wildfire may well be just the kickoff to a long, hot and possibly record-setting summer in the region of the globe showing the most rapid and obvious signs of human-caused climate change. Already this year, Arctic sea ice is declining at a pace that could result in a record loss by September. And what happens in the Arctic doesn't necessarily stay in the Arctic: Recent research shows that declines in Arctic sea ice are connected with changes in weather patterns far afield. The animation at the top of this post shows one sign of the trouble brewing in the high north. It consists of satellite images acquired between April 1 and 24 over the Beaufort Sea off Alaska and the neighboring Arctic Archipelago in Canada. It shows a huge area of sea ice — perhaps 500 miles or more across — that is breaking up as it is rotating. The proximate cause: strong surface winds. But they would likely not be having quite so dramatic an effect were it not for sustained, anomalous warmth. 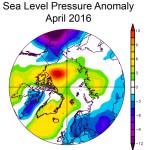 April 2016 sea level pressure compared to average. Above average pressure, indicated in red, orange and yellow, persisted over the Beaufort Sea. (Source: NSIDC) The winds were the result of strong, counterclockwise air currents swirling around a high pressure system that remained parked over the region during April. (Click on the thumbnail at right for the details.) In the past, this area off Alaska's northern coast has been thick with ice during spring. But not now. "While the landfast ice north of Alaska usually has a thickness of 1.5 meters, our U.S. colleagues are currently reporting measurements of less than one meter," said Stefan Hendricks, a sea ice physicist at Germany's Alfred Wegener Institute, during a press conference in late April. "Such thin ice will not survive the summer sun for long.” 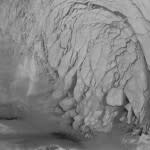 Source: NOAA/NASA All of this twisting, cracking and fracturing is indicative of an early start to the spring breakup of sea ice in the Beaufort Sea. These events were noted in a NASA release back in April that was accompanied by the image at right from the Suomi-NPP satellite. (Please click on the thumbnail to enlarge it.) You can also see clear signs of the breakup in this mosaic of images from NASA's Terra satellite, acquired on May 7: 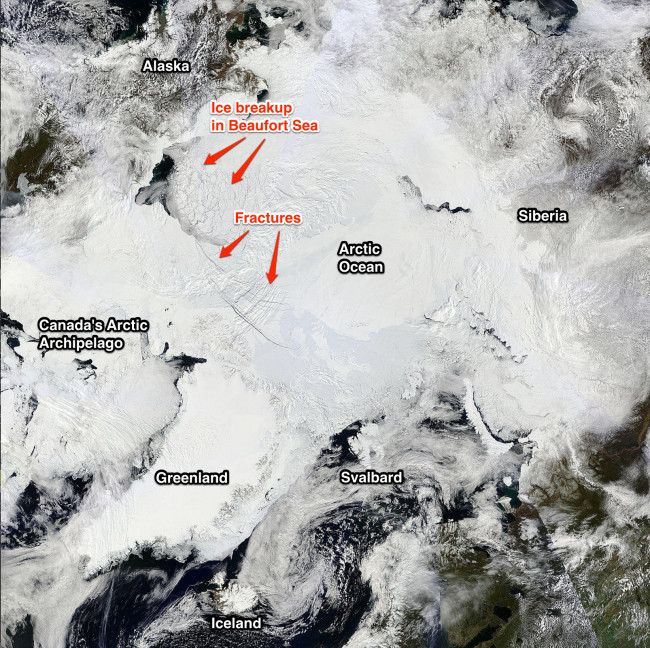 This mosaic of Terra satellite images shows the entire Arctic basin. Click to enlarge. (Source: NASA EarthData) I've labeled the image, which encompasses the entire Arctic basin, so you can get your bearings. Make sure to click on it, and then click on the image again, to zoom in close. Check out the continuing breakup of ice in the Beaufort Sea, as well as those huge fractures running through hundreds of miles of ice in the Arctic Ocean. Long-term declines of floating ice in the Beaufort Sea are affecting the region's most iconic species: the polar bear. Thanks to increasing open water, bears are having to swim longer and longer distances between suitable chunks of floating ice on which to perch while hunting and resting. Changes in the Beaufort Sea are also contributing to a broader-scale, long-term decline of sea ice in the entire Arctic basin. Here's how: 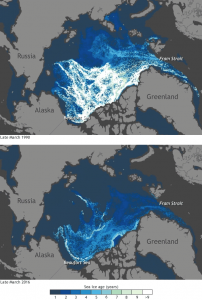 The maps show sea ice age in late March 1990 (top) and 2016 (bottom), when sea ice is at its maximum winter extent. Younger, thinner ice appears in shades of blue; older, thicker ice in pale green and white. Ice-free ocean water is dark gray. (Source: Climate.gov via NSIDC.) Sea ice used to remain for a long time along the southern arm of a feature known as the Beaufort Gyre, a clockwise circulation pattern in the Beaufort Sea. Over the years, the ice would build up, forming thick, stable, multi-year ice that helped form a bulwark against declines in sea ice extent. But starting in the mid-1990s, that changed, thanks to long-term warming along the northern coast of Alaska, as well as Siberia, according to a report from the National Snow and Ice Data Center. Melting increased, and now, much less thick, multi-year ice remains there. This long-term trend, and the signs of early ice breakup in the Beaufort Sea right now, do not bode well for the coming summer season in the Arctic. Satellite data show that sea ice during the summer of 2015 was already extraordinarily thin. Thanks to a particularly warm winter, "in many regions of the Arctic new ice only formed very slowly," says Marcel Nicolaus, an Alfred Wegener Institute sea ice physicist. "If we compare the ice thickness map of the previous winter with that of 2012, we can see that the current ice conditions are similar to those of the spring of 2012 – in some places, the ice is even thinner.” That year marked a record low for Arctic sea ice at the end of the summer season. Right now, the geographic extent of Arctic sea ice is far below the long-term average. And it appears to be setting daily record lows, according to the National Snow and Ice Data Center. (As an aside, you may have read that data from a sensor on the satellite that NSIDC uses to monitor sea ice, have been unusable since early April. This assessment is based on data from other instruments.) 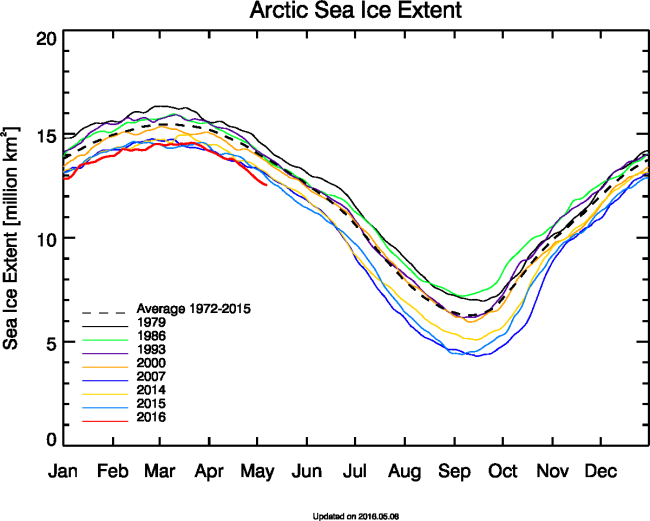 Annual Arctic sea ice extent (total area of at least 15% ice concentration) for selected years since 1979. The data come from the AMSR2 instrument on the Japan Aerospace Exploration Agency's Shizuku satellite. (Source: University of Bremen) By September, we should know whether the red line in the graph above, showing Arctic sea ice extent for 2016, will dip lower than all of the others. By then, we'll also know whether the Fort McMurray fire was just a fluke, or whether continued warm and dry conditions lead to other conflagrations. I'd say it's a very good bet.