Even as the costliest wildfire to fight in U.S. history nears containment, a new, dangerous blaze has ignited 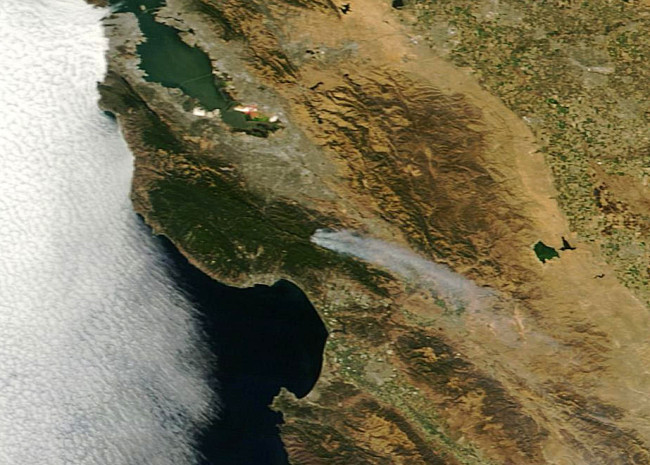 The Loma Fire burns south of San Jose on Sept. 27, 2016, as seen by NASA's Terra satellite. (Source: NASA Worldview) I knew something bad was up when a Facebook friend posted this yesterday:

Oh joy! Now I have smoke coming in from TWO wildfires!

And then a little while later:

He lives in the Carmel, California, right on the edge of the Soberanes Fire, which has been burning since July 22. And his comments pretty well sum up California's wildfire woes at the moment. Even as the almost-contained, 128,595-acre Soberanes Fire continues to smolder, sending smoke my friend's way, a new and dangerous wildfire has ignited not far off. It's the Loma Fire south of San Jose. After getting started late Monday afternoon, it has destroyed one home and six outbuildings, and threatens 300 more structures. Already covering 2,250 acres, the new blaze is just 10 percent contained, according to the latest update from the California Department of Forestry and Fire Protection, known as CalFire. Here's a snippet from the update:

Firefighters from throughout California are aggressively fighting the Loma Fire which continues to spread in the Loma Chiquita Road and Loma Prieta Road area of the Santa Cruz mountains. The fire is burning in steep inaccessible terrain covered in dry drought stressed fuels.

You can see the smoke plume from the blaze in the image at the top of this post, acquired yesterday (Tuesday, Sept. 27, 2016) by NASA's Terra satellite. The Soberanes Fire is directly south, right at the bottom edge of the image. (No smoke from that blaze is visible in the image.) https://twitter.com/NWSBayArea/status/781182639919071232 Smoke from the Loma Fire today can be seen blowing south and a little east in the upper left frame of the animation of radar imagery above. Look for the green and blue stuff emanating from the fire area, outlined in red. And here's what it looked like this morning in a time-lapse shot from the roof of the building where the San Jose State University Department of Meteorology and Climate Science is located: https://twitter.com/RobMayeda/status/781182572449497088 Meanwhile, the Soberanes Fire recently went into the record books as the costliest ever in U.S. history in terms of firefighting costs. As of Sept. 20, 2016, the cost had reached $208.4 million. It has destroyed 57 homes. Click on the screenshot below to take a 3D, Google Earth flyover of the wildfire, showing the perimeter of the fire, and the areas of active burning as of September 11, 2016: 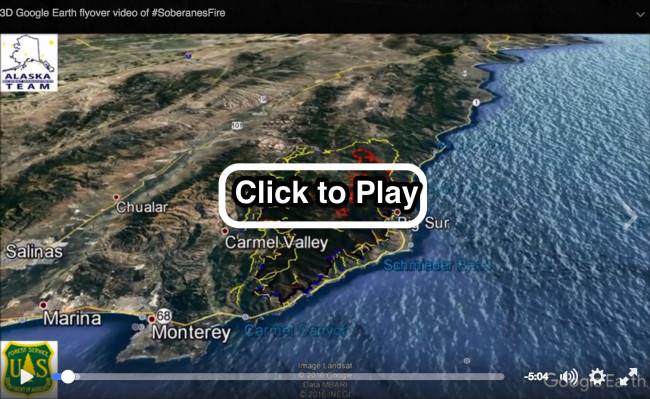 3D Google Earth simulated flyover of California's Soberanes Fire on Sept. 11, 2016. (Source: Alaska Interagency Incident Management Team) Since September 11, the nearly 2,000 people fighting the blaze have managed to bring containment from 60 percent to 89 percent today. Full containment is expected in just two days. The next image — a Landsat 8 satellite view of the Soberanes fire — is beautiful yet at the same time unsettling, providing a sense of just how much territory has been scorched in two months: 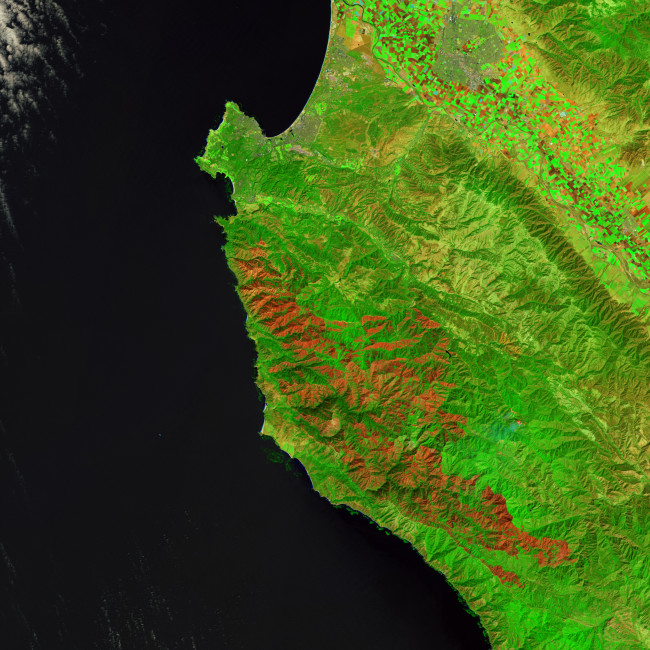 The Landsat 8 satellite captured this view of the entire extent of the Soberanes Fire near the California coast between Monterey and Big Sur on Sept. 15, 2016. (Source: NASA Earth Observatory) This false-color view "combines shortwave infrared, near-infrared, and green light to provide a clear view of the charred landscape (dark red)," according to NASA's Earth Observatory. That red, charred area comprises two-thirds the size of the entire City of New York.