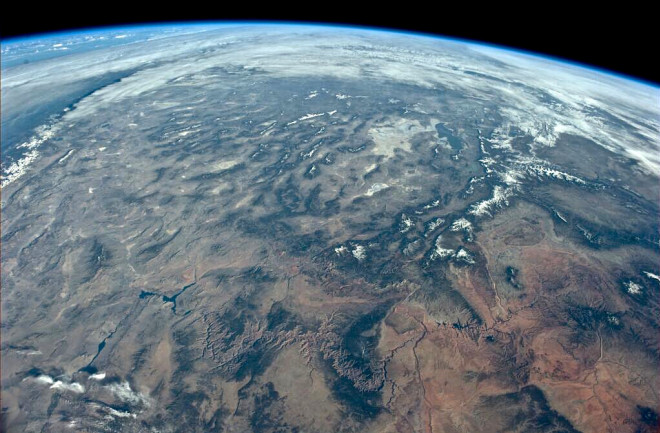 Much of the Western United States is visible in this photograph shot from the International Space Station. (Source: NASA) Severe drought continues in a large portion of the West, according to the latest U.S. Drought Monitor report, issued yesterday. In California, already particularly hard hit by drought, the situation is worsening. Temperatures there were 9 to 12 degrees above normal, which caused breathtakingly rapid melt of the California snowpack. Some areas of the Sierra Nevada lost half of the water locked up in snow in just one week. Yet, there was little change in inflows into the state's starved reservoirs.

Click for an animation of the change in the water content of snow in California's Sierra Nevada. (Source: NOHRSC) With the exception of parts of the Pacific Northwest, and some areas of Wyoming and Colorado, the West overall experienced yet another dry week. Warm temperatures were also the norm. And drought conditions worsened in eastern New Mexico and the southwestern corner of Colorado. The photograph at the top of this post, taken by astronaut Koichi Wakata aboard the International Space Station in late March, looks north from the finely etched Grand Canyon at bottom. Much of the interior West is visible in this single dramatic image. At the extreme left of the photo you can make out the Sierra Nevada Range, where some snow is still evident, and the Central Valley of California beyond. Also clearly visible in the photograph are parts of Arizona, Nevada, New Mexico, Colorado, and Wyoming. Idaho and the Pacific Northwest are visible in the upper part of the frame, and possibly a bit of Montana. In the lower right quadrant you can make out Lake Powell upstream of the Grand Canyon on the Colorado River. In the lower left quadrant is Lake Mead, downstream of the canyon. These are the two giant reservoirs that act as hydrologic savings banks, helping to insure water supplies to some 30 million people. Other dams also store water in the Colorado River Basin, a fair portion of which is visible in the photo. According to the Bureau of Reclamation, overall storage of water in the basin now stands at just 47 percent of capacity, down from 53 percent last year at this time. But there is a bit of good news — or perhaps I should say less bad news: Winter has brought a healthy amount of snow to the Colorado River Basin overall. As of April 14, the basin snowpack stood at 114 percent of normal. And the bureau is forecasting above normal inflows into Lake Powell through July. But it won't be even remotely enough bring water storage back to some semblance of normal.