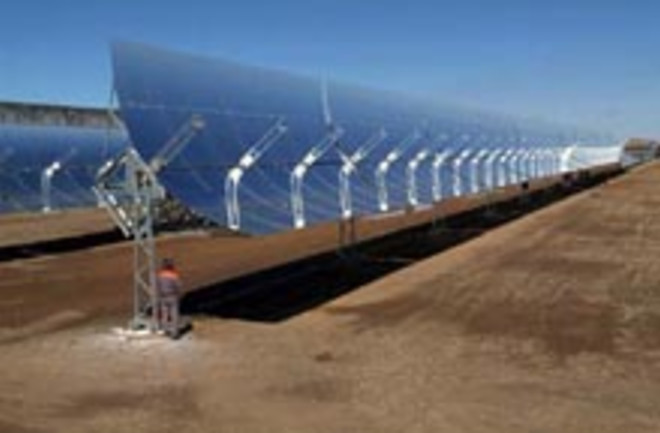 California's aggressive energy rules require its utilities to hit an ambitious target: 20 percent of their electricity should come from renewable sources by the end of this year. They're not going to make it. But because of the drive for renewables, they are close to building some of the biggest solar power projects in the country—including one that would be the biggest ever. The Beacon Solar Energy Project received the seal of approval from the California Energy Commission (CEC) this week. Beacon will be a 250-megawatt plant built north of Los Angeles near Mojave, California, and would cover more than 2,000 acres. Beacon is solar thermal: Rather than converting sunlight to electricity through photovoltaic cells, solar thermal projects use mirrors to concentrate the heat of the sun, creating steam to turn turbines.

California hasn't issued a license for this kind of big "solar thermal" power plant in about 20 years. But in the coming months, the energy commission will vote on eight other, large-scale solar projects that the state needs to meet its renewable energy goals. [San Francisco Chronicle]

One of those other projects would dwarf the Beacon project. The Blythe Solar Power Project

, a proposed 1,000-megawatt (or 1-gigawatt) solar thermal operation, received a final environmental impact statement from California's government. The CEC recommended that this project also be approved.

When completed, the Blythe plant would nearly double the current 585 megawatts of installed commercial-scale solar generation nationwide and would have a capacity to generate nearly three times the electricity produced at the country's largest solar facility -- the nine-unit, 354-megawatt Solar Energy Generating Systems plant in Kramer Junction, Calif., according to statistics provided by the Solar Energy Industries Association. [The New York Times]

We can expect the mad rush to continue—not just because of California's renewable energy standards, but also because the money to build these things can be here today and gone tomorrow depending on whether Congress decides to extend the funding period.

Many companies are in a scramble to get approval for their solar projects and break ground within the year in order to take advantage of a Treasury grant program and the Department of Energy's renewable-energy loan-guarantee program, both of which are both due to expire at the end of 2010.... The BLM (Bureau of Land Management), which has jurisdiction over 264 million acres of public lands, has received approval requests for 34 different solar thermal projects that together would total about 24,000 megawatts and cover over 300,000 acres of the Mojave Dessert, according to the CEC. [CNET]

Related Content: DISCOVER: Introducing the Most Efficient Solar Power in the World

80beats: A Novel That Laughs Along with Climate Change: Ian McEwan’s Solar