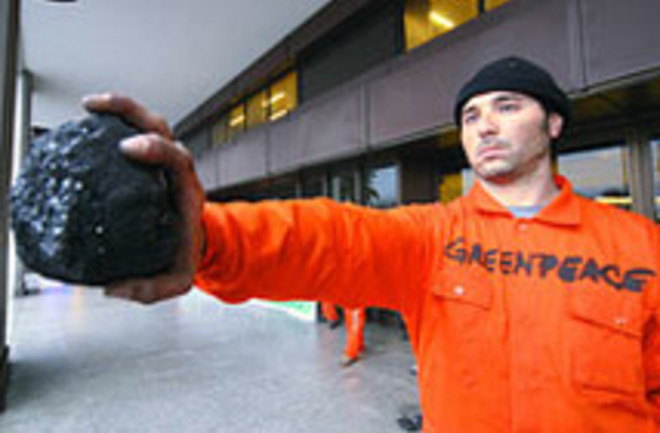 A British jury has cleared six Greenpeace activists of causing criminal damage when they vandalized a power plant last year in a protest over global warming, based on the defense attorneys’ argument that the protesters were trying to prevent even worse damage from climate change. Yesterday’s verdict is expected to embarrass the government and lead to more direct action protests against energy companies [The Guardian].

Last October, the Greenpeace protesters scaled the smokestacks of a coal-fired power plant as a publicity stunt to protest the United Kingdom’s continued reliance on coal-fired power plants, which emit large amounts of the greenhouse gases responsible for global warming. The protesters were halfway through painting a slogan on the side of one smokestack (“Gordon, bin it,” a British way of asking Prime Minister Gordon Brown to chuck coal), when the police served the activists an injunction by helicopter and forced them to stop. They were charged with causing more than $50,000 in damages based on the cost of removing the paint. E.ON, which owns the power plant, said that the company was in a state of shock over the verdict [The Times].

Jurors accepted defence arguments that the six had a “lawful excuse” to damage property at Kingsnorth power station in Kent to prevent even greater damage caused by climate change. The defence of “lawful excuse” under the Criminal Damage Act 1971 allows damage to be caused to property to prevent even greater damage – such as breaking down the door of a burning house to tackle a fire [The Independent]. The trial was a remarkable affair featuring testimony by an Inuit leader from Greenland and NASA climate scientist James Hansen, who argued that the world needs an immediate moratorium on new coal-fired power plants.

The reprieved activists greeted the verdict with delight. “This verdict marks a tipping point for the climate change movement,” said Ben Stewart, one of the six. “If jurors from the heart of Middle England say it’s legitimate for a direct action group to shut down a coal-fired power station because of the harm it does to our planet, then where does that leave government energy policy? We have the clean technologies at hand to power our economy, it’s time we turned to them instead of coal” [Reuters].