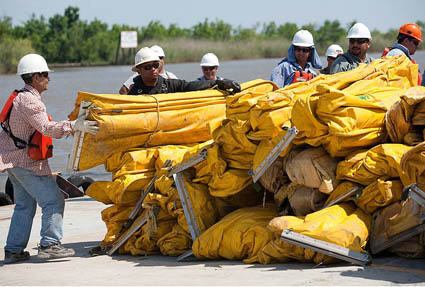 BP says this morning that it has successfully capped one of the three places where oil is leaking deep down in the Gulf of Mexico. But as of now, that hasn't slowed the flow of oil.

Submersible robots, controlled remotely from a ship on the surface, were able to place a specially designed valve over the end of a leaking drill pipe lying on the sea floor in water about 5,000 feet deep, and stop oil from escaping at that point [The New York Times].

As the leak could potentially become much worse, BP is still racing to install better technological fixes. In a briefing on Capitol Hill, BP vice president David Rainey conceded to lawmakers that the total spilling per day—the estimate of which was raised from 1,000 barrels a day to 5,000 last week—could conceivably reach as high as 60,000 in a worst-case scenario.

At the briefing, Mr. Rainey and officials from Transocean and from Halliburton, which was providing cementing services on the platform, also acknowledged that they did not know how likely it was that oil from the spill would be caught up in the so-called loop currents in the gulf and be carried through the Florida Keys into the Atlantic Ocean. “What we heard today from BP, Halliburton and Transocean were a lot of worst-case scenarios without any best-case solutions,” said Representative Edward J. Markey, Democrat of Massachusetts, who leads the Energy and Environment Subcommittee of the House energy panel [The New York Times].

BP's current attempt at a solution is the containment dome, a big box of steel and concrete that would be lowered over the leak to gather the crude together and pump it into a ship on the surface. At a press conference yesterday, BP's COO Doug Suttles said the dome would leave harbor at about noon today, towed by a barge out to the spot where the Deepwater Horizon rig blew up and sank.

While Suttles said that the successful capping of one leak wouldn't change the amount of oil going into the Gulf, he also said that dealing with two leaks rather than three would make the containment dome attempt a little easier. If BP is able to install the dome in such deep water, it plans to begin pumping oil into a tanker called Enterprise early next week.

BP and the Coast Guard caught a break with the weather this week that has bought the Gulf Coast shorelines a little more time.

A rainbow sheen of oil has reached land in parts of Louisiana, but the gooey rafts of coagulated crude have yet to come ashore in most places. Forecasts showed the oil wasn't expected to come ashore until at least Thursday. "It's a gift of a little bit of time. I'm not resting," U.S. Coast Guard Rear Adm. Mary Landry said [AP].

With that extra time, Alabama Governor Bob Riley said preparers would be able to reach the target of about 800,000 feet of containment boom necessary to protect the state's beaches. BP executive Suttles says places like Biloxi, Mississippi and Pensacola, Florida had begun clearing beaches of debris in the event that oil eventually gets there. And if waters stay calm, he says, BP and the Coast Guard might resume controlled burns of the most concentrated pockets of oil.