"Bombogenesis": Watch as a Storm in the North Atlantic Explodes into a Powerful Cyclone

https://youtu.be/tbI_Dxo2zSA Want to cook up a nice meteorological stew called "bombogenesis" (otherwise known as explosive growth of an extratropical cyclone)? Here's the recipe: Take a low pressure system mix in a big dollop of heat coming off the Gulf Stream. Now, move the developing storm into the North Atlantic where you've got relatively warm air to the southeast and frigid, polar air to the northwest. Stir... The video above shows what you wind up with: Explosive growth of a cyclone in the North Atlantic. (Technically speaking, bombogenesis occurs when the central pressure of a storm drops 24 milibars in 24 hours or less, and that most definitely occurred here.)

The video is based on infrared and water vapor data acquired by the Meteosat Second Generation on April 15 and 16. Called the "RGB Airmass" product, the data and the false-color scheme are designed to help meteorologists monitor the evolution of extratropical cyclones and jet streaks. The cyclone in question develops toward the upper left corner of the frame, off the coast of Newfoundland in Canada. As the storm develops, it grows an eye-like feature. Here's another view, acquired by NASA's Terra satellite on Thursday: 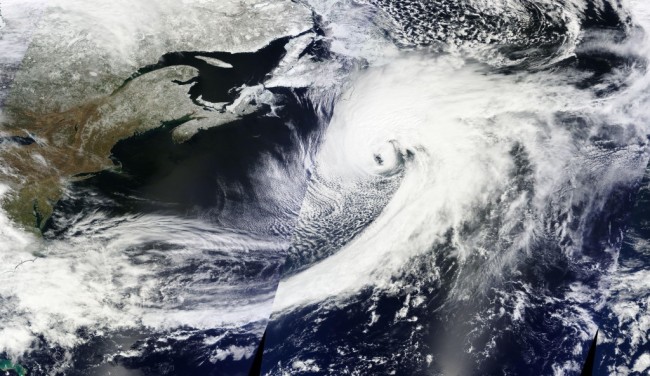 NASA's Terra satellite captured this image of an extratropical cyclone in the North Atlantic on Thursday, April 16, 2015. (Source: NASA Worldview) The storm looks all the world like a hurricane. Technically, it's too far north to be called a hurricane. Even so, this one was one beastly storm that whipped up hurricane-force winds and waves exceeding 40 feet.