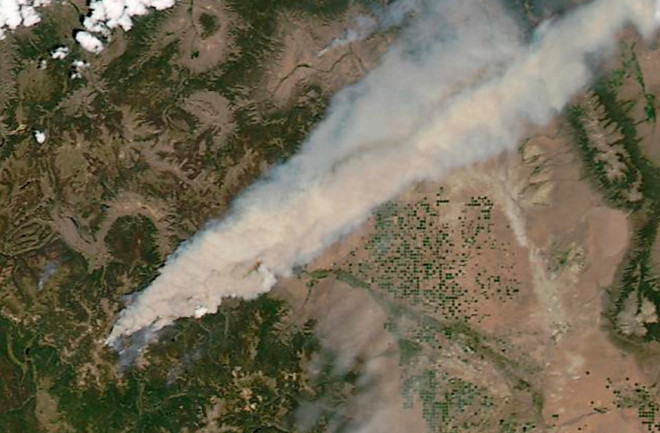 The smoke plume from the West Fork Complex fire in the San Juan Mountains of Colorado streams to the northeast, as seen in this image captured by NASA's Aqua satellite on Thursday, May 20. (Image: NASA) Firefighters have been battling dozens of blazes across the West today, as a forecast for hot, dry and windy conditions prompted the National Weather Service to designate 186,476 square miles centered on the Four Corners region at critical risk for wildfire. The image above is of the West Fork Complex fire in southwestern Colorado, which has so far burned 8,375 acres. It consists of two wildfires "burning in steep, rugged terrain with large amounts of beetle-killed spruce," according to InciWeb. The terrain is making it unsafe for firefighters to attack the blazes directly. Other fires burning in Colorado include the East Peak fire in Huerfano County south of Denver, which prompted the evacuation of 178 campers at a Boy Scout Ranch late Wednesday. As I write this Thursday evening, the blaze has burned 1,000 acres, and the town of Walsenburg, CO, population 2,980, is under pre-evacuation orders. Meanwhile, the Black Forest Fire, which began near Colorado Springs on June 11, has scorched more than 14,000 acres and destroyed 509 homes, making it the most destructive in state history. Firefighters were hopeful that they would have it fully contained by the end of the day, according to the Denver Post. Major wildfires are also burning in New Mexico, Arizona, California and Alaska. (Check out "Flame Broiled Alaska," my post from yesterday.)

The fire weather outlook from the National Weather Service on June 20, 2013. (Click for a larger version.) Unfortunately, the weather likely will not provide any relief in the short run. Quite the opposite, in fact. The forecast for the area in red on the map at left includes temperatures in the 90s, low relative humidity ranging from just 5 to 10 percent, and winds in places that could gust higher than 20 miles per hour. I don't think I can think of a better recipe for wildfire, which is, of course, why the National Weather Service designated the region at critical risk of wildfire through at least 1200Z, or 8:00 a.m. Eastern Daylight Saving time, on Saturday. Larger population centers in the critical risk area include Flagstaff, Arizona, Albuquerque and Farmington, New Mexico, and Pueblo and Colorado Springs, Colorado. They say an ounce of prevention is worth a pound of cure. But it doesn't look like that message is getting through to lawmakers in Washington. As the Associated Press reported yesterday:

A combination of government austerity and the ballooning cost of battling the ruinous fires has taken a bite out of federal efforts to remove the dead trees and flammable underbrush that clog Western forests. The U.S. Forest Service says that next year it expects to treat 1 million fewer acres than it did last year.