Blaze the Way for Biodiversity Research with BioTrails 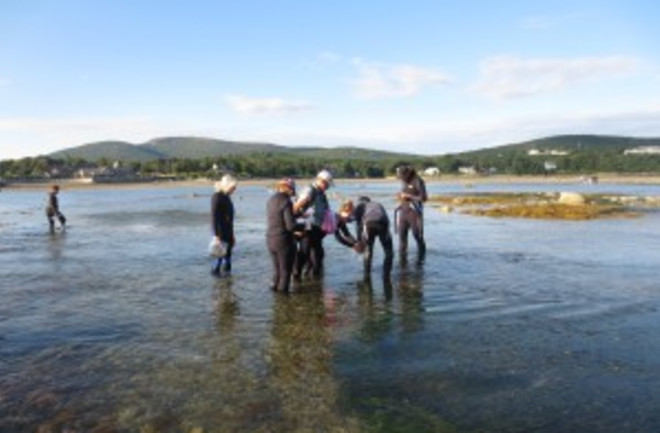 Photo credit: with permission from Hannah Webber Learn about new DNA-based technologies to characterize species in Acadia National Park this summer. Our earth is home to approximately 9 million eukaryotic species. Plus or minus a million or so. While it’s a trifle embarrassing that we don’t know exactly how many or even what other inhabitants share our world, it’s no small task to enumerate the earth’s biodiversity. Biologists currently identify animals, plants, and fungi by careful observation- color patterns, morphological differences, distinct behaviors and other features that depend on an expertly trained human eye. But species are also uniquely identifiable by sequences of DNA encoded in their genomes. For example, a macaque monkey carries a signature sequence in its genetic code that is shared by other macaques but is different from close primate relatives. Scientists can take advantage of these unique genetic codes by sequencing the DNA of biological specimens in order to classify them in a technique called DNA barcoding. Next week on June 16 and June 17, citizen scientist volunteers can try their own hands at DNA barcoding in the eelgrass ecosystem of Frenchman Bay, Maine and contribute to biodiversity research in a program called BioTrails. BioTrails will also be hosting a BioBlitz event later this summer on July 20 for those interested in learning about the use of DNA barcoding in the identification of insects. The BioTrails program is organized by principal investigator Karen James’ group at the Mount Desert Island Biological Laboratory and supported by a grant from the National Science Foundation to create a citizen science initiative to improve ecology research and the public’s understanding of it. Compared to traditional methodologies to identify species which rely on highly trained taxonomists, DNA barcoding enables public participation in sample collection, and thereby offers to substantially increase the amount of ecosystem population data available to scientists. And because it doesn’t require subjective information, DNA barcoding can also improve the accuracy of species information and facilitate the discovery of new species. BioTrails' program design will eventually be extended to the National Parks Service such that DNA barcoding can be used to evaluate conservation and restoration projects and to improve monitoring of species in these regions. “Our lives are intertwined in so many important ways with the lives of the other species with whom we share our small planet, but because of climate change and other environmental changes, they are on the move," said James. In fact, today approximately 12% of bird species, 23% of animal species, and 32% of amphibian species are threatened with extinction as a consequence of overexploitation, habitat loss, and climate change. These organisms provide contributions that are vital to us, like plant production of crops and oxygen, but collectively biodiversity is important for maintaining the function and stability of ecosystems, including biomass production, nutrient cycling, and the prevention of infectious diseases. "If we want to understand, monitor and manage how the species that we depend on and enjoy, or that make us sick, are responding to change, we must observe them through space and time. The task is enormous, and there simply aren’t enough scientists," said James. As helpful the Reddit forum for crowdsourcing species identification is (which includes posts such as “I have these bugs in my office, what are they?”), the participation of citizen scientists in DNA barcoding will be important in solving what scientists have deemed the "taxonomic impediment." In order to understand the impact of human activity on ecosystems, the first steps will be to identify who's who in our teeming world and create a scalable and robust system for keeping track. To use DNA barcoding, scientists must first extract DNA from a specimen under survey and then sequence a signature gene (i.e. the barcode) from its genome. Cytochrome oxidase I encoded in mitochondrial DNA is often the gene of choice since it is characteristically similar within a species group and different otherwise. The gene's sequence is then compared to a reference set of sequences to identify its origin. Curating complete reference sets can be challenging to accomplish, underscoring the importance of citizen science research in DNA barcoding. On the flip side, by participating in hands-on DNA barcoding opportunities, citizen scientists can gain a context for other cutting edge applications of DNA sequencing which are becoming increasingly popular as costs of the technology decline. DNA sequencing is now used to diagnose resistant pathogens in clinical bacterial infections and to characterize cancer patients' tumor types and assess their prognosis based on this information. Like all sequencing applications, DNA barcoding can be subject to error, most commonly in interpretation of the sequence. Some sequences may represent incorrect information or may be indecipherable, and as a result it will be important to assess these cases to understand the limitations of the technology. Volunteers will have an opportunity to analyze mystery sequences at both events this summer. At the BioTrails program next week, citizen scientists will kayak through Frenchman Bay to procure samples of marine invertebrates. In the afternoon, volunteers will take them back to the lab and learn how James and her team turn these animal samples into data to inform ecological population surveys in Acadia National Park. At the BioBlitz event in July, interested participants can collect and sort insects and learn how DNA barcoding facilitates the identification process. Citizen scientists involvement has great potential for impact in biodiversity research, as James conveys. "DNA-based species identification can help by accurately identifying organisms observed and collected by members of the public in the service of environmental research, restoration, and management projects. The result could be a step-change in the scale at which we are able to do biodiversity research in a rapidly changing world."

Learn more about projects like BioTrails at SciStarter, a resource of 800+ citizen science projects around the world.

Know about other DNA barcoding citizen science projects? Join the discussion on the Scientists Without Borders forum, or tell us in the comments below.