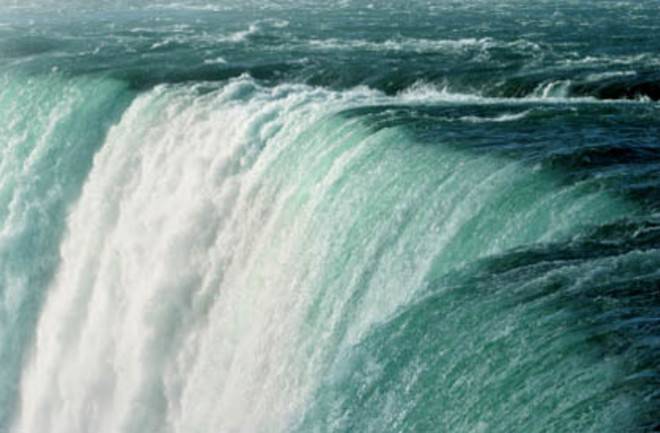 Greenland's ice sheet is melting at a record-breaking rate—but it's not all tumbling straight into the sea. A significant portion of Greenland's meltwater—which forms on the surface during the summertime and can pool into lakes—finds its way straight through the ice sheet to the bedrock. There, it disperses and lubes up the ice-bedrock interface, substantially accelerating the flow of ice to the sea which, theoretically, causes the sea level to rise and exposes more ice to melting. So how does water on the surface penetrate through thick, subfreezing ice in the first place? In July 2006, researchers Ian Joughlin and Sarah B. Das found the answer in a shocking way: One of the lakes they were observing—which contained 11 billion gallons of water—emptied out in less than an hour and a half. That’s about three times the current flow rate of Niagara Falls. In an article published last week in Science Express, Joughlin and Das wrote that the deluge poured out through a 980 m conduit from the icebed of the lake straight through to Greenland’s bedrock—so quickly that it actually lifted the ice sheet about a meter up and a meter to the side. Over the next 24 hours, the subglacial lake dispersed beneath the ice, where it may have slicked up the bedrock for a large chunk of the ice sheet. Das and Joughlin found that lakes such as this—which form when the meltwater water pools—can create cracks in the weaker ice floor. Once these fractures form and fill with water, they propagate rapidly downward through the full ice thickness to the bed. The researchers discovered that this type of massive drainage was actually a common occurrence, which is worrisome. Similar events may be linked to Greenland’s recent increase in seismic activity, indicating that our warming climate will see larger, more frequent lake formation and slicker bedrock. Good-bye, Battery Park!