Bees Get Buzzed on Pesticides, Keep Coming Back for More 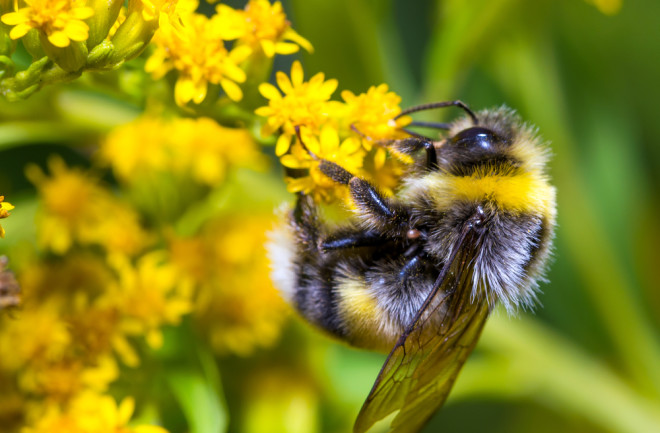 (Credit: Sergey Lavrentev/Shutterstock) Once bees get a taste of pesticides, it seems they can't help coming back for more. For years, common agricultural pesticides, like neonicotinoids, have been shown to have detrimental effects on bee colonies. Though the results aren't always consistent, the bulk of evidence shows that pesticides are bad for bees. Exposed bees can have difficulty reproducing, die younger and aren't as attentive to their nests when the chemicals show up in their food sources. One major criticism of studies looking at bees and pesticides, though, has been that they don't accurately mimic real-world conditions. Previous studies have begun to chip away at that argument, and another, published Tuesday in The Proceedings of the Royal Society B, reveals an even more worrying effect of neonicotinoids. Not only can they harm bees, the insects seem to be learning to prefer food laced with the pesticides. Some kinds of neonicotinoids were recently banned in the European Union, but they remain in use in the U.S. and elsewhere.

Researchers from Imperial College London and Queen Mary University of London set up an experiment that allowed bumblebees to forage on nectar that was either clean or laced with thiamethoxam, a commonly used neonicotinoid. They let the bees forage for a few days and watched to see which feeders they gravitated towards. By the end of the trial, the bees showed a clear preference for nectar that contained the pesticide. Switching up the order of the feeders didn't alter the behavior at all — the bees still sought out food dosed with neonics. "We think our study provides some of the best laboratory evidence so far that an attraction to thiamethoxam might be happening in the real world," lead author Andres Arce, a researcher at Imperial College London, says in an email. "[It] means that flowering crops treated with thiamethoxam might actually become more attractive to bumblebees and may actually draw in wild and managed pollinators to feed on them."

The find worries researchers on two levels. One, by simulating a situation where bees can choose to avoid pesticides in their food, the researchers account for a major difference between most lab studies, where all of the bees' food has pesticides in it, and real-world conditions, where it's not as widespread. Even more surprisingly, they were able to show that the bees don't learn to avoid food that contains a potentially harmful chemical. Instead, they come to actively seek it out. It's almost too easy to make a comparison to humans and some of the harmful substances we choose to inhale or imbibe. However, while the bees are displaying behavior that's consistent with our definition of addiction in humans, the disease is a complex neurological phenomenon and it's a bit facile to map it directly onto bees. There are striking parallels, though. As the name suggests, neonicotinoids act on nicotine receptors in the brain, and the same holds for bees. These receptors are also responsible for memory and learning, and the researchers' work indicates that the bees do learn to seek out the pesticide over time. The extra stimulation pesticide-laden food delivers could be helping the bees to better remember where it is, Arce says. How exactly the neonicotinoid is affecting their brains is a topic for future research, but it's nevertheless possible that the bees are getting a buzz from neonicotinoids.