Their dams can improve everything from wildlife habitats to water quality. 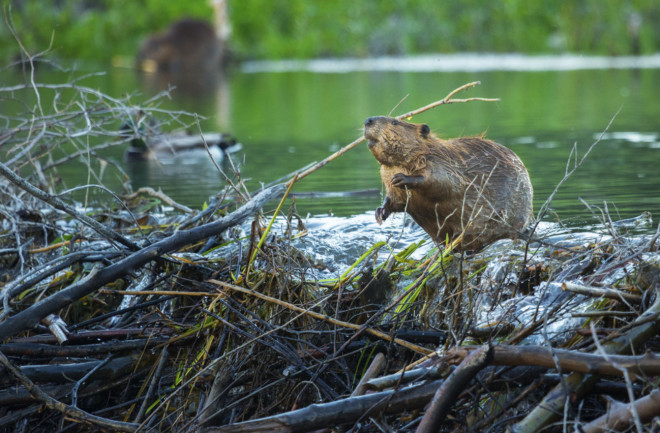 Beavers are among the best ecosystem engineers. Their mighty chompers make quick work of trees, and the resulting logs dam up moving water to create swampy ponds. These changes to the landscape can open up important new habitats for all kinds of species, from amphibians to moose, within the beavers’ native range in North America.

“They are unique in this regard, in the ability to modify their habitat,” says Steve Windels, a wildlife biologist who studies beavers at Voyageurs National Park in Minnesota. They are second only to humans in their ability to completely change an ecosystem, he adds.

Beavers are such great engineers, in fact, that some wildlife and landscape managers are putting the rodents to work restoring wetlands and creating dams more efficiently than even human engineers. We’re also gaining a better appreciation of their ability to create habitats important for not only wildlife, but also human-made constructions such as fisheries and water management facilities. For example, they can control the excess flow of chemicals in some waterways — and recent research shows that beaver-created ponds are more resistant to wildfires.

Beavers work for a reason. In nature, they require bodies of water deep enough to build underwater entrances for their homes, which protect them from predators. Some existing ponds or lakes are already deep enough, but sometimes the rodents must create their own by damming running water with fallen trees, branches and other debris.

Because of this, beavers are finely tuned to the noise of running water. Without the high-tech tools that human engineers have at their disposal, this is how the animals know where to plug a few more branches to stop a leak. “They don’t have a drone’s eye view of their landscape,” says Chris Jordan, a fisheries biologist with the National Oceanic and Atmospheric Administration. “They don’t have survey equipment.”

Their instincts are so attuned to this sound that some people have played the sounds of running water from speakers to manipulate beavers into building dams in certain areas. “They hear that,” Jordan says, “and then they stick something in it.”

According to Jordan, the ponds that the animals create are an important habitat for endangered salmonids like coho in the Pacific Northwest, where he works. “They can completely control what a floodplain looks like,” he says. “That makes for really rich salmon habitat.”

Slow-moving waterways with plenty of ponds are better for salmon species. There, the young fish have plenty of habitat to grow in before making their way downstream to the open ocean — and it’s easier for the adults to swim upstream to spawn. But human development over the decades has often resulted in the channeling of water into straighter, deeper rivers rather than meandering pathways. These rivers are tough to navigate even for beavers; they just don’t have the skills to dam up fast-flowing rivers.

Jordan has spent a lot of time engineering floodplains to improve salmon runs. In his work, he and his colleagues often try to convince beavers to help out by creating small, artificial dams that slow the flow enough for beavers to move in and take over. “We’re stealing from their toolbox,” he says.

Once the rivers are slowed down, beavers will sometimes move in. “They will short-circuit our process to build dams on our structures,” Jordan says, adding that they might even improve on the structures the humans built, deciding that we’re “off by two meters” and putting their own dam on top of the artificial structure. After they modify faster streams to a suitable flow, the beavers pretty much take over the show.

“Then we walk away, because they have the maintenance contract,” Jordan says. “They’re going to do a way better job because they’re there 24/7.”

And the work doesn’t only open up habitat for salmon, amphibians and other wildlife. Beaver dams result in more water storage on the landscape — something Jordan notes is increasingly important in parts of the country experiencing water shortage due to climate change and the overuse of water supplies — and help to prevent floods downstream. When melting snow or rainfall causes high fluxes of water upstream, beaver dams and the resulting ponds can buffer the impact by storing that excess water.

Humans have long realized it’s easier working with beavers than against them. In the 1940s, for example, wildlife managers parachuted live beavers into the upper areas of Idaho’s Rocky Mountains with the hope that they might help store more water on the landscape and in turn bolster lowland areas during dryer times.

“After World War II, everyone got good at throwing things out of planes with parachutes,” Jordan says. It’s unclear how well their plan worked in terms of water storage, he adds, as little follow-up research was done at the time.

But for the same reason beavers can work wonders on a landscape in some situations, they can also be a large pain in the neck in others — by plugging culverts to flood roads, for example. This has resulted in some serious planning problems, Jordan says. Small culverts are easy for beavers to block, so non-beaver engineers must either widen them enough to make the task impossible or block them off with large gates that can’t be dammed up.

“The best solution is probably to make the culvert and the animal coexist,” Jordan says. Otherwise, it’s a difficult battle to fight. “You’ll be out there as many times as the beaver is out there.”

The city of Gresham, in the suburbs of Portland, Ore., once had a strikingly similar beaver problem. Its stormwater drains were washing too many leaves and debris from the city into the Columbia River, so in 2009 Gresham constructed a 13-acre, multimillion-dollar stormwater treatment facility to trap debris and give it time to decompose in a series of ponds. Everything was going well until beavers moved into the area a few years later.

In the beginning, Jordan says, their extensive network of dams created havoc. The city tried to fight back against the rodents, but beavers are mighty persistent. You can remove individual animals from a problem area, but more will eventually come as they are typically attracted to the same kinds of features in the landscape.

Then, researchers conducted a study on the facility and found that the beavers’ dams weren’t negatively impacting the overall quality of water that ran off into the Columbia River. In fact, they were only improving it — particularly when it came to heavy metal pollutants. Since then, the facility has worked with the beavers instead of against them.

“The water that comes out of it is better quality water than the initial engineering design,” Jordan says. “There are some cool, happy coincidences.”