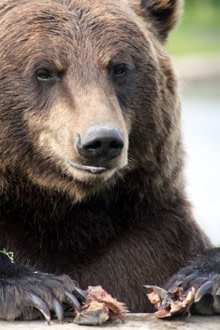 Up north in the Canadian province of Manitoba, polar bears are receiving some unwelcome guests. Researchers have seen grizzly bears moving into the area for the first time, and that might not be good news for the already-troubled polar bears.

Linda Gormezano and her team, who are publishing the study (pdf) in Canadian Field-Naturalist, weren’t even looking for grizzlies when they started to spot the huge mammals; they were flying around counting fox dens. Before 1996, there was no evidence that grizzly bears encroached on polar bear territory. From that year on, however, there have been at least 12 sightings, negating the prior theory that the barren landscape north of the Hudson Bay was impassable, in terms of resources, for migrating grizzly bears [Discovery News]. If grizzlies can survive there, Gormezano says, they’ll probably want to stay, because there’s a bevy of caribou, fish, and other good things to eat.

This worries Gormezano. She says, “Grizzlies would likely hibernate in polar bear maternity denning habitat. They would come out of hibernation at the same time and can kill polar cubs” [BBC News]. In addition, the geographical proximity would make it more likely that polar and grizzly bears would produce hybrid offspring, labeled “pizzly,” “prizzly,” or “grolar” bears.

Of course, a story about competing grizzlies and polar bears can lead to only one place: nerd-tastic arguments over which would win in a fight. While debating this at length, Canada’s The Globe and Mail asks the experts. Manitoba Wildlands director Gaile Whelan Enns sees the grizzlies with the advantage: “The grizzly is more accustomed to the predator-prey relationship, whereas the polar bears are not quite as aggressive” [The Globe and Mail]. However, she notes, polar bears have the size advantage, outweighing their competitors by hundreds of pounds.

Study author Robert Rockwell says that the two bear species would most likely meet when the polar bears take to their dens to give birth, which could give the grizzlies an easy target. “If it’s a fight between a 1,200-pound male polar bear and a 600-pound grizzly, I think we know who would win,” Dr. Rockwell said. “But in this likeliest of cases, it’s debatable. There are actually reports in the literature where grizzlies have killed denning polar bear females” [The Globe and Mail].

Both kinds of bear receive protection from the province of Manitoba, and Canada lists both as species of special concern. Whether they have special concern for each other should their territories collide remains to be seen.