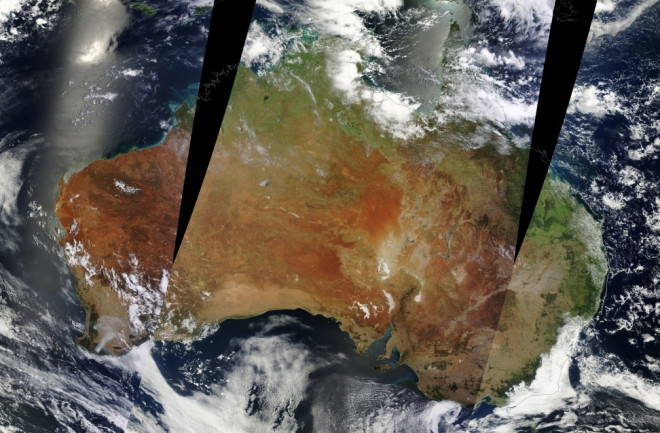 Australia as seen by NASA's Terra satellite on Feb. 9, 2015. The black strips are areas of missing data. Note the plumes of smoke from bushfires in the far southwestern part of the country. (Source: NASA) A new report out earlier this week says climate change is making Australia hotter, with anomalously warm days occurring more often and heat waves becoming hotter, longer and more frequent. Perhaps the report should have been titled "Baked Australia" instead of "Quantifying the Impact of Climate Change on Extreme Heat in Australia." To be honest, at first I wasn't going to post anything about this. That's because the report, from Australia's Climate Council, doesn't seem to have much if anything that has not been published before. It's certainly useful as a synthesis of information. But then I grew concerned that its release was timed to stick a fork in the eye of Australian Prime Minister Tony Abbott, who was about to undergo a political near-death experience. More about that in a minute. But first...

After deciding not to post anything about the report, I noted that an intense heatwave was actually gripping a large portion of the country today (Feb. 9th) — and the forecast is for more. (Click the thumbnail at right.) Also, two large bushfires continued to burn in the southwestern part of the country. You can see the plumes from one of them, in the image up top. Look in the extreme southwestern portion of the country. I wrote about these infernos a few days ago here. (And to see how one of them, near the town of Northcliffe, has evolved over the past 11 days, see the animation lower down in this post.) Anyway, Australia didn't want to let go of me today, because I next noted that the Australia Bureau of Meteorology has just reported that 2014 was the third warmest on record Down Under. That's really a whole lot of hot stuff in one day. So I decided to go ahead and post something about the report of the Climate Council, a non-profit, non-governmental organization that was formed after Tony Abbott abolished the official government Climate Commission, which had been tasked with providing information to the Australian public on climate change and solutions. Oh, and here's one last news peg: Today, Tony Abbott barely survived what he himself described as a "near death experience": an attempt by rebel Parliament members of his own party to remove him as Australia's Prime Minister. This has a climate change angle too, as Reuters reports:

Tony Abbott's tenuous grip on power has again put climate-change policy at the centre of the nation's political leadership struggle, raising concerns among miners and hopes for renewable energy advocates.

Abbott once famously said that human-caused climate change was "absolute crap." Although he has supposedly tempered his position a bit since then, he remains opposed to carbon trading and very much a fan of coal. (Australia is the world's leading coal exporter.) According to the Reuters piece, Abbott has described it as a fuel for the future. Well, never mind. As the Sydney Morning Herald puts it:

Tony Abbott's leadership has suffered a massive blow - inevitably one that will prove fatal to his leadership.

Which is all a very round-about way of saying that the new Climate Council report on climate change in Australia seems newsworthy today, even if its contents aren't all fresh and new, and even if its publication was politically motivated. So with some hesitation, let's start with this:

Source: Australia Climate Council The graph above, from the report, shows that the number of days when extreme heat is widespread across Australia has increased significantly since 1910, and particularly since the 1950s. The report offers lots of additional evidence, backed by scientific research, that "Baked Australia" may well be an appropriate moniker for the Land Down Undah. For example (and quoting directly from the report):

And the report pins the blame on climate change, saying:

While climate change is already increasing the intensity and likelihood of hot days and heatwaves, recently scientists have been studying specific heat events and asking: just how much of an influence did climate change have? As the following examples show, the answer is that climate change has been a major factor in recent heat events.

Check out the report for the examples. But I will describe one here — the most provocative one, I thought: The year 2013 was Australia's warmest on record so far. Using computer model simulations of the climate system, scientists were able to determine the odds that such a record would occur due to natural variation alone — in other words, without our influence. The answer: It would occur just once in 12,300 years. Based on this evidence, the report concludes that "the 2013 record would not have occurred in the absence of climate change."

An animation of satellite images shows the day-by-day growth of a bushfire in Western Australia. (Source: NASA) Okay, I'll leave you with this animation of false-color satellite images showing the evolution of that bushfire near the town of Northcliffe in Western Australia. The images come from NASA's Terra and Aqua satellites. The first image was acquired on January 31, 2015; the last on February 10th. (Note: For some days I decided to use two images in the animation instead of one.) In the images, rust-colored tones show burned areas. Actively burning areas show up in bright orange. Five images after the start, look for huge, cauliflower shaped clouds over the blaze. These are towering fire clouds, called "pyrocumulus clouds." I reckon we'll see more bushfires like this one as Australia continues to bake.