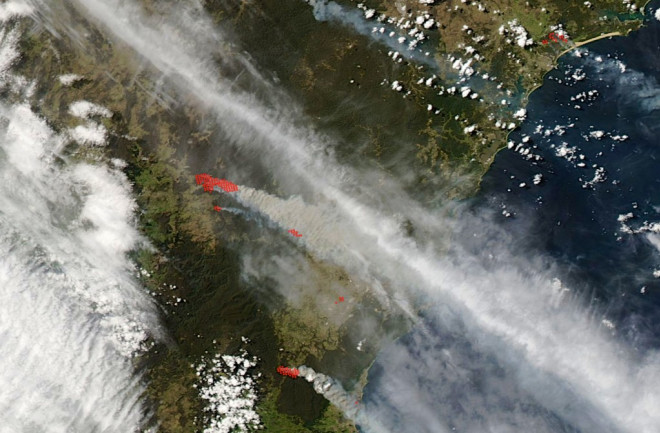 Smoke plumes from raging wildfires in New South Wales, Australia, as captured by NASA's Aqua satellite on Thursday, Oct. 17, 2013. Each red dot represents a location where a fire was detected by Aqua. Sydney is located on the coast under the thickest plume. (Image: NASA) As of the end of September, Australia had experienced its hottest 12-month period on record. And last month itself "was easily Australia's warmest September on record," according to the Australian Bureau of Meteorology. Given that, the wildfires now raging across New South Wales should probably come as no surprise. There are more than a hundred of them, according to the Sydney Morning Herald. And they have likely destroyed hundreds of homes. The image above, from NASA's Aqua satellite and centered over the Australia's Blue Mountains, shows smoke plumes streaming to the east. Each red dot is an area where a sensor on the satellite detected a fire; each one represents an area about a quarter of an acre in size. Sydney is on the coast and is obscured under the thickest plume. Here's a photo by Davina Andersson of what the smoke looked like over the city on Thursday:

A thick shroud of smoke from wildfires to the west envelopes Sydney on Thursday. (Photo: Courtesy Davina Andersson) I'll have more to say about the climatic context of these fires in a subsequent post. So please look for that.