Bacteria Find They Can All Get Along

Scientists at the Max Planck Institute for Developmental Biology in Germany recently watched their tiny, 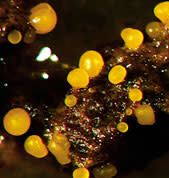 Some 100,000 M. xanthus bacteria collaborate to make each spore-producing sac.

mindless subjects rapidly evolve sophisticated ways to interact and cooperate with each other. Gregory Velicer and his wife, biologist Yuen-tsu Yu, made the observation while experimenting with a mutant form of Myxococcus xanthus. These bacteria normally gather together to chase down prey or to collect into a spore for survival. But the mutant strain had been modified so it could no longer engage in these group activities—sort of like a wolf that had been bred so that it no longer had the instinct to hunt in a pack. Instead of dying off, the altered bacteria evolved new types of social behavior—and did so in just 40 weeks. The original form of M. xanthus used hairlike tubes, called pili, to coordinate movement with surrounding bacteria. The mutant version, lacking pili, developed a brand-new kind of fibrous extension that allowed the organisms to bind with their neighbors. “We watched novel forms of cooperation evolve before our eyes,” says Velicer. Social interactions are essential to the survival of many microbes, including many pathogens, so further research could reveal ways to prevent dangerous collaborations within these miniature societies.