Baby It's Cold Outside, and Here's Why

http://youtu.be/TOyx9lNhih4 Okay, it's not cold everywhere in the U.S. and Canada — but the Arctic sure seems firmly established in the Rocky Mountain West. Here in Niwot, Colorado (not far from Boulder), I woke up to temperatures below zero. 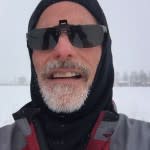 Yours truly. And to be honest, I'm loving it. That's a selfie I took while on a run yesterday with my son. I think it was 10 degrees F at the time, and the snow was coming down. (And yes, I think our brains were probably a bit frozen at the time...) The numbing cold and quite a lot of winter storminess is forecast to spread by tomorrow, New Years Eve. Have a look at the video above to get a sense of what's going on. It's an animation of the winds at the level of the jet stream, centered on North America (as forecast by weather models; for more, go here). The red streak indicates the strongest winds of the jet stream. And that big south- and west-dipping bulge? Well, that's allowing deep Arctic chill to penetrate all the way south and west across the West. The center of the, ahem, polar vortex has taken up residence over Hudson Bay, according to Weather Underground's Steve Gregory, "while a high pressure ridge continues to build over the easternmost Pacific into Alaska." You can see the ridge he's referring to in the eastern Pacific — it's apparent in the upward bend of the jet stream off the west coast of North America in the animation above. Gregory continues:

This upper air pattern will provide a colder flow from the Arctic southward into the central US this week, and into the easternmost states by next week. Although this is a far more seasonable pattern, all global models continue to show a highly progressive flow which will cause significant oscillations in temperature anomalies during the next 2 weeks, with anomalies varying from 'just' a few degrees below normal to 20 degrees below normal.

As the Tweet above from the National Weather Service in Los Angeles shows, by Thursday morning, southern California could see temperatures dipping into the 20s and 30s. At sunrise on New Years Day, temperatures in Pasadena will flirt with the freezing mark. That will put a chill on the Rose Parade.

And that cold, combined with ample moisture, is forecast to bring snow to the mountains above Los Angeles. They sure could use it.