Atlantic hurricanes: Is the calm before the storms ending?

High sea surface temperatures fuel hurricanes — and right now, the tank is brimming. When will the season really get rolling? 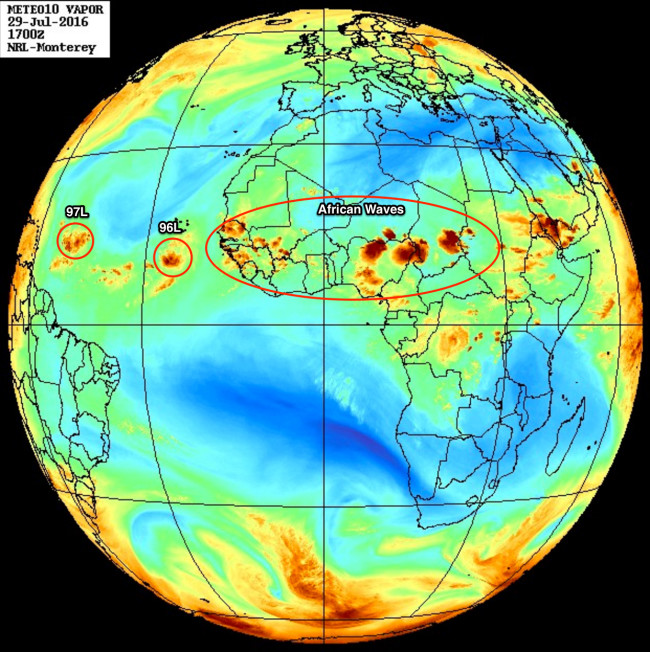 An infrared view of Africa acquired by the Meteosat satellite on July 29, 2016, reveals two disturbances in the Atlantic, plus new wave disturbances potentially brewing up over Africa. (Source: NOAA) There are no Atlantic hurricanes on the eastern horizon just yet, but far across the sea from the United States, something is definitely beginning to stir. More and more weather disturbances are arising over Africa, and propagating westward into the tropical Atlantic Ocean. "As anticipated, we are seeing a bit more activity appear now over the tropical [Atlantic] basin," writes forecaster Steve Gregory at Weather Underground. With very warm sea surface temperatures serving as potent fuel, sooner or later one of these so-called 'tropical wave disturbances' should form into a tropical storm and then spin up into a full-blown hurricane. Given that we are just now heading into peak season for Atlantic hurricanes, the overall odds of that happening are increasing by the day. Have a look at the infrared satellite image above. I've circled two disturbances that are now moving westward across the Atlantic. These were born in Africa in the region I've circled — where still more wave disturbances are brewing up during the monsoon season there. Keep reading to find out more about the two disturbances in the Atlantic and what risks they might pose. But first, a little context for what's going on: As I wrote in a previous post, the Atlantic hurricane season began early and with a bang: Hurricane Alex, the first of the season, swirled in the North Atlantic in mid January — which was shockingly early. There were three other named storms after Alex; the last one dissipated on June 21. And since then? Zip. Nadda. A cyclonic drought.

See the post linked above for an explanation. Suffice it to say that the dearth of cyclones isn't really that unusual.

As the graphic above shows, the heart of the Atlantic hurricane season typically begins around August 1 — a few days from now. And on average, the season ramps up to a peak on or around Sept. 10. Before the peak, in June and July, there is relatively little activity. And those storms that do form tend to do so far to the west of Africa, as this animation shows:

I made the animation using maps that depict the areas of origin and typical tracks of Atlantic hurricanes by month. Keep in mind that these maps depict average conditions, and that hurricanes can form in different locations and travel different paths. But the average pattern is revealing. During June, storms tend to form in the warm waters of the Gulf of Mexico. In July, some of the action shifts to the east, with storms forming in the area of the Lesser Antilles islands. Moving into August and September, the action shifts even farther east. Look in particular at the white line showing the prevailing tracks. It stretches all the way to the Cape Verde Islands off the coast of Africa. This region is the most common place for powerful hurricanes to have their origins. But things don't ramp up there until August — when sea surface temperatures and other conditions become ripe for tropical systems to form in the region. 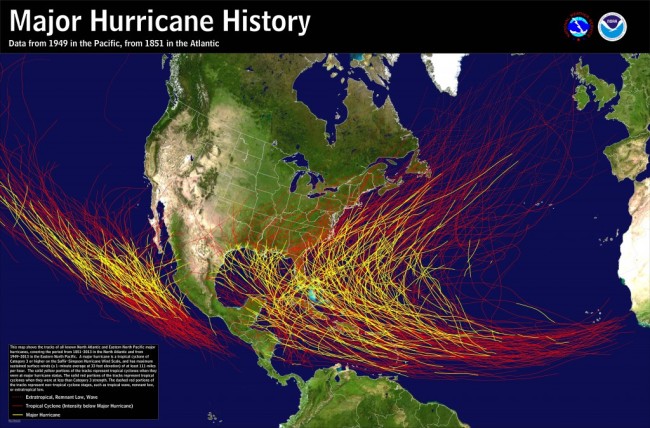 This map shows shows the tracks of all known North Atlantic major hurricanes between 1851 and 2013 (as well as the eastern part of the North Pacific between 1949 and 2013). The dashed red portions of the tracks show the storms when they were not strong enough to be considered tropical cyclones. These include tropical waves moving off Africa and out into the Atlantic that later developed into hurricanes. (Make sure to click on the map to enlarge ir enough so you can discern the details.) The solid red portions of the tracks show storms that have developed into bona fide cyclones of less than Category 3 strength (with sustained winds below 111 miles per hour). Lastly, the yellow portions of the tracks show the storms when they were swirling as Category 3 strength and above, making them major hurricanes. Now, look at all those tracks originating near the Cape Verde Islands... So right now, we're just starting to head into the part of the hurricane season when the action tends to pick up, particularly off Africa, where the strongest storms often are born. And that brings me right back to those disturbances out in the Atlantic that I mentioned at the beginning of this post. The first, designated Invest 97L by the National Hurricane Center, had its origin as a tropical wave disturbance in Africa. Since moving out into the Atlantic, it has been moving west at a relatively brisk clip of 20 to 25 miles per hour. The NHC says its shower activity is poorly organized, and the chances of it developing into a tropical cyclone are just 30 percent over the next five days. Let's take a look at the origins of the second one, designated 96L, as seen in this animation of infrared satellite images acquired between July 27th and 29th, 2016: https://www.youtube.com/watch?v=Xu83DeJ2Xmg&feature=youtu.be Check out the westward propagating storminess over Africa, starting on July 27th. Toward the end of the animation (which loops several times), this tropical wave moves out into the eastern Atlantic, just south of the Cape Verde Islands. This is 96L. According to the National Hurricane Center:

Shower activity associated with a tropical wave and a low pressure system centered a couple of hundred miles south of the Cape Verde Islands continues to show signs of organization. However, recent satellite wind data indicate that the low does not have a well-defined circulation. Some development is possible during the next day or two before the disturbance encounters a less favorable environment over the central tropical Atlantic early next week. * Formation chance through 48 hours...medium...40 percent * Formation chance through 5 days...medium...50 percent

Africa may be the ultimate source of many Atlantic hurricanes, but it can also be the source of environmental conditions that are harmful to them: dust and dry air streaming out over the Atlantic from the Sahara. When this Saharan Air Layer really gets going, it puts the kibosh on cyclone development. Here's what the forecast for the SAL looks like for next Saturday, Aug. 8: 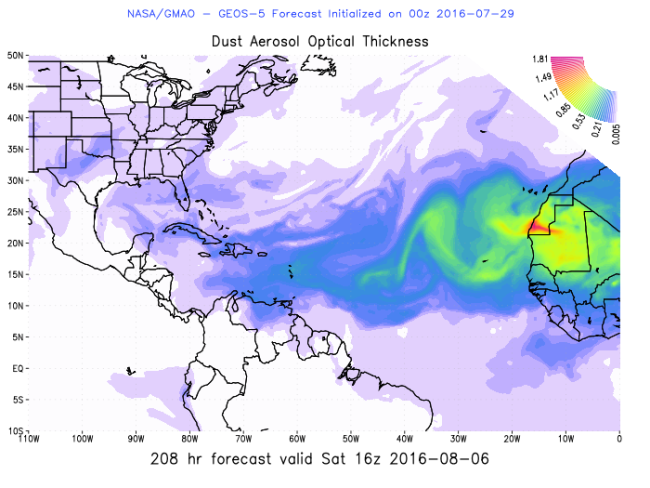 See all that greenish-yellow, orange, and red stuff? That's the dust. In this forecast, it extends halfway across the Atlantic in the region where tropical cyclones tend to form. Time for a summary: Stronger disturbances have indeed been boiling up in Africa. And we are entering the season when those become more and more likely to spin up into cyclones. These have the potential to grow into strong hurricanes. But right now, some conditions are still not right for this to happen. Assuming environmental conditions do become favorable for cyclones to form in the Atlantic, we could be in for quite an interesting peak season.

The map shows how sea surface temperatures vary from the long-term mean. See those yellow, orange and red tones in the Atlantic, including off the coast of Africa and stretching all the way across the ocean? There's the hurricane fuel. And the tank is definitely full. Maybe in a week or so it'll be time to buckle our seat belts...