At the Maelstrom's Edge: the Great Salt Lake 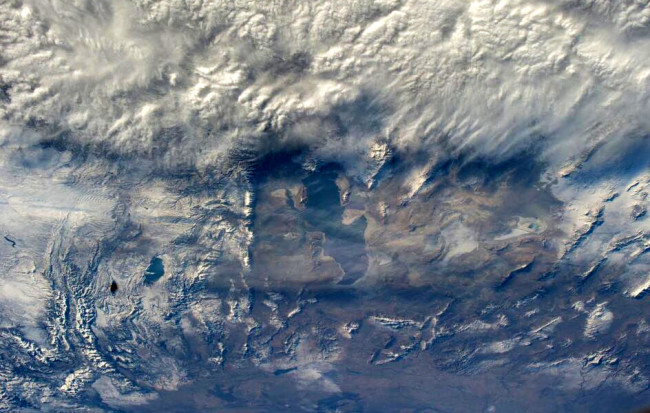 Rick Mastracchio Tweeted this photo of the Great Salt Lake from the International Space Station on Nov. 22. (Source: Rick Mastracchio/NASA) I've been missing the view of Earth from the International Space Station since Karen Nyberg returned to Earth a couple of weeks ago. But now, flight engineer Rick Mastracchio aboard the ISS is coming into his own with Tweeted photos from that orbital perch, including this really dramatic one of the Great Salt Lake. The view is a little disorienting because south is actually to the top of the photo. The snow-capped Wasatch Range, which forms the backdrop for Salt Lake City (in shadow near the edge of the clouds), rims the eastern side of the lake (left side). This north-south mountain range marks the very western edge of the Rockies. The Basin and Range province begins on the other side of the lake. You can see the snow-covered ridges and valleys of this region toward the right edge of the picture. That snow likely came from a massive winter storm system that blew in off the Pacific starting on Friday. When Mastracchio snapped his photo, the maelstrom was just to south of the lake. Here's an animation of GOES weather satellite images of the storm: http://www.youtube.com/watch?v=ozPttu7N9Bo&feature=youtu.be You can see the circulation swirling counter-clockwise around a low-pressure system that starts offshore of Southern California and then slowly moves inland. The circulation sucks copious amounts of moisture from the Pacific and Gulf of California, and then shoots it like water from a fire hose across a good portion of the Southwest. If you look carefully at the top-middle part of the animation, you can spot The Great Salt Lake emerging from the clouds at the storm system's northern edge. The lake itself is an amazing feature. Here are some quick facts about it from the U.S. Geological Survey:

Lastly, some details about the photo. Here's Mastracchio's original Tweeted photo: https://twitter.com/AstroRM/status/404009126100860928 You'll probably note that it lacks the contrast, saturation and punch of the image at the top of this post. That's because I downloaded the photo to my laptop and processed it using several adjustments in my Aperture application. First I cropped the image to come in closer on the most interesting portion. Using the curves tool, I then adjusted the tonal values of the shadows, midtones, and highlights to come closer to how the eye would see the scene. I also brought up the exposure in the shadows, and played with a few other parameters to process the image in a way that makes it a bit more compelling to my eye than the more washed out original. I think that loss of contrast is completely natural when shooting through the window of the space station's cupola, and especially all of the obscuring atmosphere. So my processed image is probably not precisely what the scene looked like to the naked eye. But I don't think I took too many liberties here. If you're inclined, let me know what you think.

The SciencesFrom the Crew Dragon to Mars: Cady Coleman on NASA's Path Forward
Recommendations From Our Store