As the Northwest bakes in a potentially historic heat wave, the region is also choking on thick smoke from wildfires 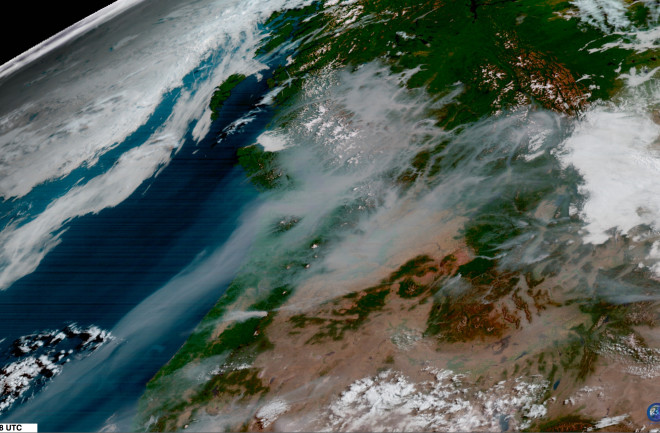 Smoke from wildfires blankets a large portion of the Pacific Northwest, as seen in this image from the GOES-16 weather satellite acquired on Aug. 2, 2017. (Source: RAMMB/CIRA) The Pacific Northwest is sitting under a massive heat dome and a horrible pall of thick smoke from raging wildfires in British Columbia and Washington.

Source: RAMMB/CIRA You can see the grayish smoke clearly in the image above from the GOES-16 weather satellite. Make sure to click on it to view it full-sized. Also click on the thumbnail at right for a labeled version so you can get your geographic bearings. Air quality across some localized parts of western Washington reached unhealthy levels for everyone today, according to the National Weather Service. And across large swaths of the region, the air has been considered unhealthy for sensitive people, such as those with asthma.

Dense smoke from wildfires obscures Vancouver in the upper right quadrant of this satellite image and pours out toward the sea over the Strait of Juan de Fuca separating Vancouver Island (upper left quadrant) from Washington State. The image was acquired by NASA's Terra satellite on Wednesday, Aug. 2, 2017. (Source: NASA Worldview) The silver lining is that the smoke in the air is reflecting some incoming solar radiation away, probably helping to keep temperatures just a little cooler than they would otherwise be. But for this region, conditions are still searing. As this afternoon's forecast discussion from the Portland, Oregon office of the weather service describes the situation:

A significant heat wave is underway across the Pacific Northwest and will continue across most of the region through the rest of the week. The hottest days will be today through Friday, with afternoon temperatures near or above 100 degrees each day in the interior. Many sites will be close to all-time record high temperatures Wednesday and Thursday.

Here is the extended forecast for Portland (click to enlarge it):

Source: National Weather Service The graphic tells the tale: excessive heat plus a Red Flag Warning, meaning the hot temperatures and low humidity are causing the wildfire risk to soar. Just what folks need in a region already choking on smoke. Also note that the forecast high for Portland tomorrow is 106 degrees. That's mind-boggling for a city with typical highs at this time of year that are 25 degrees cooler. And if the temperature in the city goes just a degree higher tomorrow, that would "match or exceed its hottest temperature on record (at any time of year) of 107 set in 1942, 1965 and 1981," writes Jason Samenow, weather editor of the Washington Post. "Only smoke flowing into the region from British Columbia could put a lid on temperatures, preventing all-time highs." As Cliff Mass, professor of meteorology at the University of Washington, puts it in his weather and climate blog, "We are talking about one of the major sustained heat waves in a long time around here."