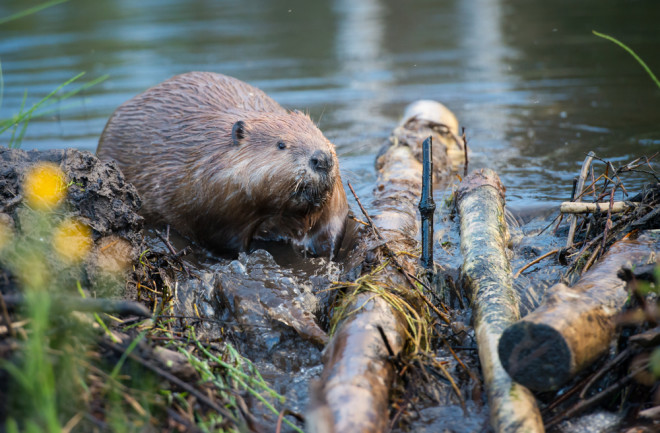 It began decades ago, with a few hardy pioneers slogging north across the tundra. It’s said that one individual walked so far to get there that he rubbed the skin off the underside of his long, flat tail. Today, his kind have homes and colonies scattered throughout the tundra in Alaska and Canada — and their numbers are increasing. Beavers have found their way to the far north.

It’s not yet clear what these new residents mean for the Arctic ecosystem, but concerns are growing, and locals and scientists are paying close attention. Researchers have observed that the dams beavers build accelerate changes already in play due to a warming climate. Indigenous people are worried the dams could pose a threat to the migrations of fish species they depend on.

“Beavers really alter ecosystems,” says Thomas Jung, senior wildlife biologist for Canada’s Yukon government. In fact, their ability to transform landscapes may be second only to that of humans: Before they were nearly extirpated by fur trappers, millions of beavers shaped the flow of North American waters. In temperate regions, beaver dams affect everything from the height of the water table to the kinds of shrubs and trees that grow.

Until a few decades ago, the northern edge of the beaver’s range was defined by boreal forest, because beavers rely on woody plants for food and material to build their dams and lodges. But rapid warming in the Arctic has made the tundra more hospitable to the large rodents: Earlier snowmelt, thawing permafrost and a longer growing season have triggered a boom in shrubby plants like alder and willow that beavers need.

Aerial photography from the 1950s showed no beaver ponds at all in Arctic Alaska. But in a recent study, Ken Tape, an ecologist at the University of Alaska Fairbanks, scanned satellite images of nearly every stream, river and lake in the Alaskan tundra and found 11,377 beaver ponds.

Further expansion may be inevitable.

(CREDIT: K.D. TAPE ET AL / SCIENTIFIC REPORTS 2022) These images show how beavers have transformed a tundra stream near the treeline on Alaska’s Seward Peninsula. The blue arrow indicates direction of stream flow. The black ponds in the 2019 satellite image have been created by beaver dams at their downstream ends, shown by white arrows.

All these new dams could do far more than alter the flow of streams. “We know that beaver dams create warm areas,” Tape explains, “because the water in the ponds they create is deeper and doesn’t freeze all the way to the bottom in the winter.” The warm pond water melts the surrounding permafrost; the thawed ground, in turn, releases long-stored carbon in the form of the greenhouse gases carbon dioxide and methane — contributing to further atmospheric warming.

While changes to the Arctic brought on by warming will happen with or without beavers, the fragility of the far-north ecosystems leaves them especially vulnerable to the kinds of disturbances beavers may cause. In fact, the tundra may be the environment most threatened by climate change on the planet, according to paleobotanist Jennifer McElwain of Trinity College Dublin, author of an article about plant reactions to ancient warming episodes in the Annual Review of Plant Biology.

McElwain and her colleagues examine fossil leaves and use the number and size of pores, or stomata, on the leaves to infer the level of carbon dioxide in the atmosphere those plants breathed. “When there’s very high carbon dioxide atmospheres, you see plants with bigger and fewer stomata,” she explains. At times when atmospheric CO2 was higher than around 500 ppm, forests grew in the high Arctic.

“During greenhouse intervals in the Earth’s deep past, we have forested ecosystems all the way up to 85, 86 degrees north and south latitude,” McElwain says. There were no places on Earth where the climate was too cold for trees to grow during these times. And where there are trees, the animals that depend on them — such as beavers — can thrive. In fact, there is evidence that a forested Arctic is where the beaver’s dam-building skills first evolved, millions of years ago (see sidebar).

(CREDIT: KEN TAPE/Knowable Magazine) A pond created by a beaver dam in the tundra, near the Denali Highway in the foothills of the Alaska Range. The mound sticking up from the pond is the beavers’ lodge.

In the past, as now, the polar regions warmed faster than the rest of the planet because heat is carried poleward by the global circulation patterns of the oceans and atmosphere. And since human combustion of fossil fuels has now pushed atmospheric CO2 levels to 415 ppm and climbing, the spread of shrubs and trees onto today’s warming tundra appears unavoidable — as does the spread of animals that need those plants to survive.

Tape has tracked both beavers and other creatures that have moved north onto the tundra in the wake of climate change, including moose that feast on tall, dense growths of shrubs that didn’t exist there 70 years ago. But the impact of beavers on the landscape is unique.

“It’s best to think of beavers as a disturbance,” Tape says. “Their closest analogue is not moose. It’s wildfire.”

Scientists like Tape are only just beginning to study what that disturbance means for other Arctic animals, including fish and the people who depend on them.

Inupiat people near Kotzebue in northwest Alaska first noticed beavers living in local streams in the 1980s and 1990s. Inuvialuit hunters on the north slope of the Yukon saw their first beaver dams in 2008 and 2009. Because beavers can have such a dramatic impact on the landscapes they inhabit, seeing these animals in the fragile tundra ecosystem sparked concern.

“The Inuvialuit and Inuit people that I’ve heard from do have some big questions about what changes will happen because of beaver arriving in the Arctic,” says the Yukon biologist Jung.

Those concerns have grown as the beaver numbers increased. Tape and his colleagues’ work tracking the expansion of the beaver population has shown that the tundra around Kotzebue hosted only two beaver dams in 2002, but had 98 dams by 2019. In the adjacent Baldwin Peninsula, he has seen the number of dams grow from 94 to 409 between 2010 and 2019.

But how the beavers will affect specific areas and species in the Arctic is an open question.

In the beaver’s traditional range, which before the arrival of fur trappers stretched from south of the Arctic tundra to northern Mexico and from the Pacific to the Atlantic, the dams they build provide a haven from predators as well as habitat for an array of creatures, including insects, frogs and songbirds. Scientists have come to view their landscape engineering as beneficial, and even critical in some vulnerable ecosystems. In many places south of the tundra, conservationists have moved to protect and reintroduce beavers to restore stream and wetland habitats.

But in the Arctic, beavers are sometimes seen as unwelcome intruders that could disrupt life on the tundra. Beaver dams are already making hunting and fishing more difficult for some people in the Arctic, forcing them to portage their canoes around the dams, for example. But scientists are only beginning to investigate whether larger concerns about impacts on the health of both humans and fish are warranted. Studies are underway to see, for example, if beaver dams increase the risk of the parasite Giardia in tundra streams — a charge that has been leveled against beavers, which can carry Giardia but are a less likely source of infection than humans, pets and livestock.

Some Indigenous people who live by fishing and hunting are worried that beaver dams may block the migration of fish like the Dolly Varden, an Arctic salmonid that lives in the ocean for part of its life cycle but spawns and overwinters in tundra streams. The fish may be able to cope, says Michael Carey, a research fish biologist with the US Geological Survey.

In northwestern Alaska where Carey studies Dolly Varden and Arctic grayling, almost all the beaver dams he’s seen are on small side channels. “We don’t see them cutting off the system for fish to migrate up and down,” he says.

It’s possible that beaver dams could actually benefit fish in some parts of the Arctic. On Alaska’s Seward Peninsula, researchers have found evidence that beaver dams create good rearing habitat for juvenile coho salmon. In northwest Alaska, Tape and his colleagues have found that the unfrozen water in beaver ponds creates potential refugia for Arctic fish.

(CREDIT: KEN TAPE/Knowable Magazine) A pair of swans glide across a beaver pond on the Chulitna River, in the Alaska Range. In traditional beaver habitat south of the tundra, beaver dams create habitat for an array of other organisms, including willows, frogs, waterfowl and songbirds. Researchers are studying the effects of beavers on tundra ecosystems.

As beavers settle in and their numbers increase, things may change. To understand the ongoing impacts of beavers’ range expansion, Tape has helped establish the Arctic Beaver Observation Network, and is participating in a roundtable discussion about beaver activities with native residents, land managers and research scientists in Yellowknife, Canada.

People in the Arctic are used to living with wildlife, but peacefully coexisting with beavers may require clever strategies that accommodate both species.

In 2010, for example, beavers settled in at Serpentine Hot Springs, an ancient cultural site in the Bering Land Bridge Natural Preserve in Alaska. Beaver dams have caused flooding of the bunkhouse there. The isolated spot can only be reached by plane or snowmobile, and a new beaver dam built in 2021 threatened to flood the runway, making it unusable. The National Park Service responded by installing a beaver flow device — a pipe built through the dam to moderate the water level in the beaver pond. This allows the animals to live there while protecting the runway — a win for beavers and people alike.

Paleobiologist Natalia Rybczynski will never forget her first visit to the Beaver Pond fossil site on Ellesmere Island, in the Canadian High Arctic. “You’re standing there in barren tundra, but you look on the ground, and it’s got these pieces of trees with cut marks,” she says. “There’s this whole different forest ecosystem” — one in which tree-gnawing beavers thrived.

Beavers first reached the North American Arctic from Eurasia by crossing the Bering Land Bridge perhaps 7 million years ago, when global temperatures and levels of atmospheric CO2 were higher, enabling forests to grow at high latitudes.

Rybczynski, now with the Canadian Museum of Nature, believes high-latitude forests are where the beaver’s dam-building skills evolved, driven by the need to adapt to cold, dark winters. Caching willow branches in water for winter food may have come first; heaped branches would have acted as weak dams. Over time, the beavers developed complex dam-building behaviors and a whole survival strategy centered on dams.

The Beaver Pond site also holds bones of Dipoides, an extinct beaver species that lived around 3.9 million years ago. It was about two-thirds as large as a modern beaver and had less powerful jaws. But the patterns of cut sticks and sediments found with the bones show strong similarities to those left behind at a 9,400-year-old fossil dam built by members of the modern genus of beaver, Castor, in northeast England. This suggests that Dipoides were also builders, and if the assemblage on Ellesmere Island was a dam, it would be the oldest one yet found.

Sharon Levy is a freelance science journalist based in Humboldt County, California. Her work appears in Undark, BioScience and other venues. She is the author of The Marsh Builders: The Fight for Clean Water, Wetlands, and Wildlife.