As Summer Finishes as Warmest on Record, A Postcard From Global Warming's Ground Zero 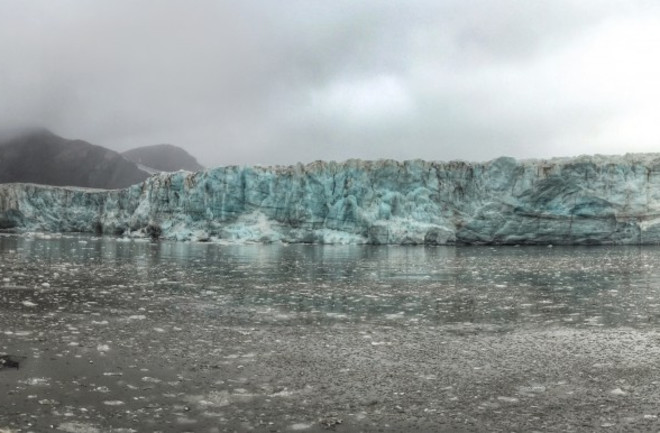 The calving front of Esmark Glacier in Norway's Svalbard archipelago, as photographed on Sunday, Sept. 13, 2015. (Photo: ©Tom Yulsman) The summer of 2015 — the months of June, July and August — was the warmest on record for the globe, according to the latest figures from NASA. And at this point, it's difficult to imagine a scenario that would prevent the entire year from entering the record books. This news comes as I'm visiting the high Arctic, which is warming twice as fast as the rest of the world, making it ground zero for global warming. I'm here in Svalbard, a Norwegian Arctic archipelago about 800 miles south of the North Pole, to co-teach a field module of a journalism course focusing on climate change. As part of the course, we visited the Esmark Glacier yesterday. This impressive river of ice flows into a bay that opens onto Isfjorden, a large fjord on Svalbard's west coast. We journeyed there by boat, traveling through mist and choppy waters from Longyearbyen, Svalbard's largest town. You can see the glacier's calving front in the mosaic of iPhone photos above, which I shot as our boat cruised to within about 100 yards of the ice. While we watched — and as if on cue — a modest chunk of ice broke free. It was an example of what glaciologist Penny How calls "nibble calving" — little bits and pieces of ice breaking free from a glacier's face.  "Calving is how most glacial ice is transferred to the oceans," says How, who is researching glaciers in Svalbard as part of her PhD work at the University of Edinburgh. This means it has a large impact on sea level rise. In fact, about 35 percent of sea level rise is currently coming from glacial discharge into the oceans thanks to warming temperatures, according to How. With NASA's release of the latest monthly numbers on global warming, it's worthwhile to keep in mind that no region has seen greater impacts than the Arctic. "Almost all the glaciers and ice caps in the Arctic have lost mass over the last century, and in many places, ice mass loss has accelerated in the past decade," according to the Norwegian Polar Institute. Svalbard has not been immune from this trend. Summers here have been warmer lately than at any other time in the last 1,800 years. And the ice has been responding. About 60 percent of Spitsbergen, Svalbard's largest island, is covered by glaciers. About 2,100 glaciers, including relatively large ones like Esmark, and much smaller ones in places like mountain cirques, are known to exist here. Research strongly suggests that glaciers here have been losing mass over the last century. And the impact on sea level rise has not been small. As a report from the Norwegian Polar Institute puts it:

About half of the global increase in sea levels [is] caused by melting of the "smaller" glaciers, i.e. all glaciers outside of Greenland and Antarctica, but [there are] still relatively large margins of error in these estimates. It is therefore important to quantify the contributions to sea level rise from the various ice-covered areas of the Earth. Svalbard represents a not insignificant contribution, since about 10% of the total ice-covered area in the Arctic (excluding Greenland) [is] located there. Furthermore, melting rates on Svalbard [are] relatively high because of Svalbard's location in a relatively warm part of the Arctic.

This is the first of what I'm hoping will be several posts based on my reporting here. As part of that, I've got lots of images to share, including photographs of one of the strangest places I have ever encountered in my life: the Russian coal mining town of Barentsburg. To find out what makes it so strange, please check back.