As seen from space: the sacred lands of Bears Ears — now protected as a national monument

As far as I can tell, this is the first published satellite image of the newly created Bears Ears National Monument 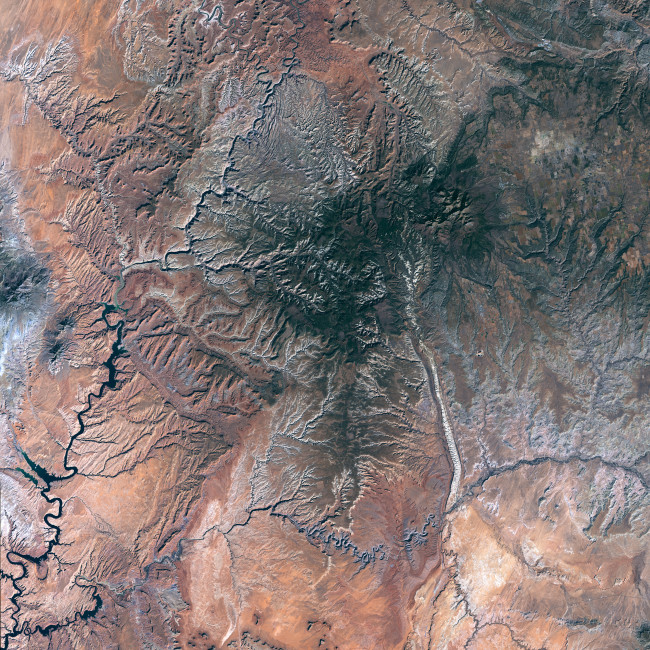 Landsat-8 satellite image of the region encompassing the new Bears Ears National Monument in Utah, created under the Antiquities Act by President Barack Obama on Dec. 28, 2016. Speaking of the wild western side of the Bears Ears buttes in Utah, Wallace Stegner wrote in 1969:

To start a trip at Mexican Hat, Utah, is to start off into empty space from the end of the world.

And now, 47 years later, a huge chunk of of this empty space — some 1.35 million acres of it, an area nearly as large as Delaware — has been set aside by President Barack Obama as the new Bears Ears National Monument. I do have to respectfully disagree with Stegner on one point: This land is not at all empty space. In addition to some of the most spectacular geological features on Earth, it is filled with stunning rock art, ancient cliff dwellings, ceremonial sites, caches of untouched cultural remains, and countless other artifacts — much of it at increasing risk from vandals and looters. As President Obama put it in his proclamation establishing the monument:

Rising from the center of the southeastern Utah landscape and visible from every direction are twin buttes so distinctive that in each of the native languages of the region their name is the same: Hoon'Naqvut, Shash Jáa, Kwiyagatu Nukavachi, Ansh An Lashokdiwe, or "Bears Ears." For hundreds of generations, native peoples lived in the surrounding deep sandstone canyons, desert mesas, and meadow mountaintops, which constitute one of the densest and most significant cultural landscapes in the United States.

"The reason we are where we are now is because of the dignity and integrity of the tribal leaders," says Charles Wilkinson, Distinguished Professor at the University of Colorado Law School. Wilkinson consulted with five tribes — the Hopi, Navajo, Ute Mountain Ute, Zuni, and Ute Indian Tribe — as they produced the proposal for the monument that President Obama has now created, under authority granted by the Antiquities Act. A group consisting of representatives from the tribes, called the Bears Ears Commission, will help guide development of management plans, as well as ongoing management of the monument going forward. Tribes have never had a voice quite like this in creation and now management of a national monument. "Remember, ever acre of federal land was once Indian land," Wilkinson says. "That means every acre is a candidate for a tribe or individual Indian having an interest in it." 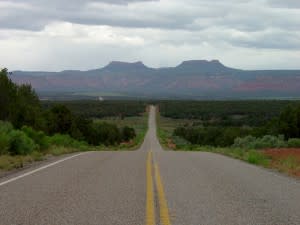 Looking north along Utah Highway 261 toward the Bears Ears buttes. Natural Bridges National Monument is to the left of the image. (Source: U.S. Geological Survey) You may have seen photos of the new Bears Ears National Monument taken from the ground. (Click here for some spectacular ones, published by High Country News before the new monument was established.) But as far as I can tell, the very first satellite image published of the Bears Ears region since Obama's proclamation is the one I created for the top of this story. I did it using raw data gathered by the Landsat-8 satellite on November 11, 2016. Make sure to click on the image, and then click again to enlarge it. It's a big file, so you can really explore the landscape up close that way. To get your geographic bearings, and to see the outlines of the national monument as it was proposed, check out this map from High Country News: https://twitter.com/highcountrynews/status/814249575972278272 The southern boundary of the new monument is formed by the San Juan River, which forms part of the border between Utah and the Navajo Nation (also known as northern Arizona). You can see the river, with its many goosenecks, along the bottom of the Landsat image. Near it's western boundary is the Colorado River, now impounded behind Glen Canyon Dam, which has created Lake Powell — clearly visible along the left side of the image. The high green terrain toward the center of the image is the heart of the new monument. It includes the existing Dark Canyon Wilderness, and the Bears Ears buttes themselves. I've spent a lot of time exploring this region with my family. There really is nothing else like it, at least not that I've experienced. I'm grateful that the area — which has seen a surge in looting and vandalism of archeological sites in recent years — will get an extra measure of protection.