As seen from space: 'Earth's connecting point to the rest of the universe' — and a fierce legal battleground too 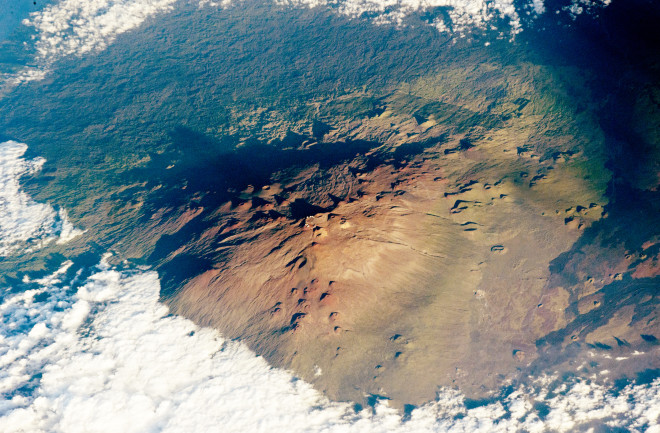 Hawaii's Mauna Kea volcano, as seen from the International Space Station on Nov. 1, 2015. (Source: NASA Earth Observatory) Click on this arresting photograph of Hawaii's Mauna Kea volcano, shot from orbit, and then see if you can make out a series of white structures on the summit. See them? They form a 'C' right at the top. (For an original, high resolution version of the image, go here.) These are some of the 13 working telescopes near the volcano's summit, as seen from the International Space Station on Nov. 1, 2015 and posted today by NASA's Earth Observatory. As the website for the University of Hawaii's Institute for Astronomy puts it, these telescopes make Hawaii "Earth's connecting point to the rest of the Universe."

The summit of Mauna Kea on the Island of Hawaii hosts the world's largest astronomical observatory, with telescopes operated by astronomers from eleven countries. The combined light-gathering power of the telescopes on Mauna Kea is fifteen times greater than that of the Palomar telescope in California -- for many years the world's largest -- and sixty times greater than that of the Hubble Space Telescope.

But the summit is also sacred ground for Native Hawaiians, who sought — and recently won — a court order blocking construction of what would be the most powerful telescope on Earth, the Thirty Meter Telescope, or TMT. According to a recent Reuters story:

Kealoha Pisciotta, president of Mauna Kea Anaina Hou, one of the groups seeking to block the telescope project, has said the site was considered a temple of the most supreme being for Native Hawaiians and also was a sacred burial ground.

A week ago, the Hawaiian Supreme Court suspended the permit for the project until Dec. 2, blocking further work until then. The photograph above shows why astronomers are so eager to build the TMT atop Mauna Kea. Notice that layer of clouds partially surrounding the mountain at about 2,000 feet above sea level? This is the top of the tropical inversion cloud layer — which is well below the summit of the mountain at 13,800 feet. The inversion traps moist maritime air down low, keeping the skies above the summit free of clouds and pollutants. In fact, there are more clear nights on the summit than most places on Earth. And the night skies are not sullied by light pollution from from major population centers. There are also no mountain ranges nearby that could cause turbulence in the atmosphere as winds passed over them. The result: an incredibly dry and stable atmosphere that makes for unsurpassed astronomical observing conditions. I've experienced this myself when I visited the Canada-France-Hawaii Telescope, or CFHT, while working on my book, "Origins: the Quest for Our Cosmic Roots." The humidity never climbed above 10 percent. And at night, the view of the skies from the catwalk of the CFHT was uncanny. Never had I seen so many stars — and because of the remarkable stability of the atmosphere, the stars barely twinkled. Given the stark and dramatic beauty of the place, it is no wonder that it is sacred ground for Native Hawaiians. As for the photograph, it was shot by an astronaut as the space station passed overhead at approximately 5 p.m. local time. Late-afternoon lighting combine with an oblique viewing angle to draw long shadows and highlight cinder cones and lava flows. The image's vivid colors are the result of digital processing by NASA in part to improve contrast. The image was also cropped, and lens artifacts have been removed.