NASA's map of how temperatures departed from the long-term mean during May 2015. Warm anomalies are depicted in yellow, orange and red tones. Cool anomalies in blue and purple. (Source: NASA Goddard Institute for Space Studies) NASA's monthly update on Earth's average temperature is out, and it shows this past May in a tie with May 2012 for second warmest on record for the month. Only May of last year was warmer in NASA's record, which extends back to 1881. So far, 2015 overall has been very warm. And with El Niño strengthening in the Pacific, it's looking increasingly likely that this year will finish as the warmest on record, surpassing year. But time will tell. 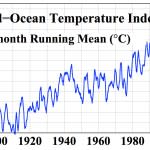 Twelve month running mean of global average temperature. (Source: NASA) Of course, one month and one even one year do not a trend make. So click on the thumbnail at right for the long term trend of global average temperature, as determined by NASA. And if you have believed the political hype that there has been no global warming for a decade or so, please consider the latest scientific evidence to the contrary: a recent peer-reviewed study showing that the rate of global warming during the first 15 years of the 21st century has been at least as great as the last half of the 20th century. (For a story explaining the research, check out Chris Mooney's piece at the Washington Post: "Federal scientists say there never was any global warming 'pause.'") As the latest evidence shows that Earth continues to warm, Republican candidates for the U.S. presidency continue to insist otherwise, even taking Pope Francis to task for the Pope's teaching on the issue. An encyclical authored by the Pope and scheduled to be officially released on Thursday links human activity to continuing global warming. Even more significantly, the Pope frames climate change not just as a political issue but as a moral one as well. For more analysis of the Pope's encyclical letter, see this post from Andrew Revkin at DotEarth — from which I've extracted this excerpt of the Pope's writing, which was leaked prior to its release:

From one extreme, some maintain at all costs the myth of progress and say that the ecological problems will be solved simply by new technical applications, not by ethical considerations or fundamental changes. From the other extreme, others believe that the human species, no matter what it does, can only be a threat and compromise the global ecosystem, so that humanity should reduce its presence on the planet and prevent any kind of interaction with it. Between these extremes, reflection should identify possible future scenarios, because there is not only one possible solution. This would leave room for a variety of contributions, which could enter into a dialogue aimed at a full answer.

Over the course of its history, the Catholic Church has not always been on the side of the angels. But right now, it would seem that the best angels of our human character are whispering in the Pope's ear.