The fly populations are more stable, they pollinate and they even eat aphids, too. 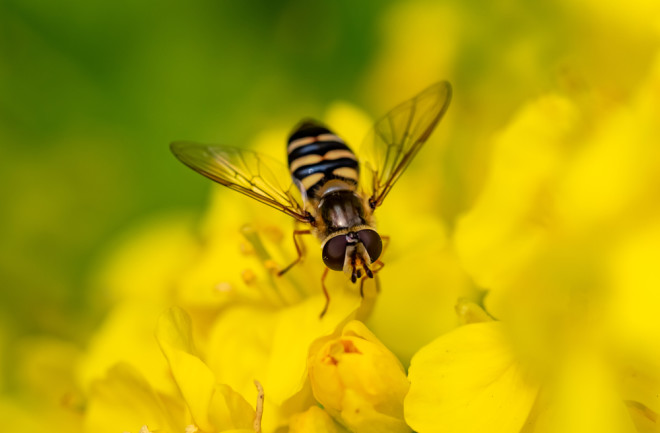 Billions of hoverflies from Europe descend on southern Britain each spring. The black and yellow striped bugs are no more than half an inch in length but make the long trek to Britain for the summer.

Once they arrive, the hoverflies pollinate flowers and lay eggs. The fly populations have remained stable unlike those of honeybees and other insects, which have dropped in recent years, researchers find in a new study. The discovery suggests the bugs may become increasingly important for pollinating crops.

“They are widely considered to be the second most important pollinators, after bees,” Karl Wotton, an evolutionary biologist at the University of Exeter in the United Kingdom, who led the new research, said in a statement.

Wotton and colleagues tracked the migrating bugs with radar equipment for 10 years. The radar covered about 27,000 square miles of southern Britain, an area just smaller than the state of South Carolina. To make sure they were only tracking hoverflies, the researchers then filtered the data to match hoverflies’ size and shape. Overall, the team kept tabs on more than 600 hoverfly mass migrations.

The flies first appear in May and become more and more abundant as the summer progresses, the researchers found. Females start laying eggs — as many as 400 — so that by July larvae abound. The flies start the trek back to the European continent in August. By September, numbers have declined again.

Hatching larvae throughout the summer multiply the hoverflies’ numbers by more than four times, the researchers estimate. Overall, more than 2.5 billion hoverflies travel to and from southern Britain each year, the team reports Thursday in the journal Current Biology.

“The number of migrating hoverflies coming and going over Britain was much higher than we had expected,” Wotton said. And their numbers have a big impact on Britain’s crops.

Hoverfly larvae feed on aphids, key crop pests in Europe, Wotton explains. Each summer, one to two generations of larvae hatch. The hungry baby bugs devour aphids as they mature. They likely consume more than 1 million cereal aphids per hectare of arable cropland, the researchers report. That means hoverfly larvae clean up about 20 percent of the typical spring aphid population densities.

Hoverflies also provide key pollinating services to wildflowers, soft fruits and agricultural crops in the mustard family like broccoli, cabbage and rapeseed, the plant that yields canola oil. And they are quite good at it. Hoverflies are frequent flower visitors and their numbers are equivalent to the managed honeybee populations that agriculture currently relies on.

Insect populations are in trouble around the globe. But hoverflies and other migrating bugs appear to be somewhat resilient. Over the 10-year study period, hoverfly numbers stayed fairly constant.

“Migrating insects are generally bucking the trend of decline that we’re seeing with many other insects,” Jason Chapman, an ecologist at the University of Exeter who led the study with Wotton, said in the statement. “Their mobility is probably a key part of this, as it allows them to move on to find the best habitats.”

“Considering that many beneficial insects are seriously declining, our results demonstrate that migrant hoverflies are key to maintaining essential ecosystem services,” he added.