As Northern Lights Shimmer, a Glacier National Park Fire Lights up the Nighttime Sky — and Is Visible From Space

The birth of the Reynolds Creek Fire in Glacier National Park on the afternoon of July, 21 is seen in this animation of images from the GOES-15 weather satellite. To the north of the smoke plume from the Reynolds Creek Fire you can also see another plume from a fire in neighboring Canada. (Source: CIMSS Satellite Blog/SSEC-University of Wisconsin/NOAA) Although the Reynolds Creek Fire burning in Glacier National Park may not be particularly large (at least not yet), its smoke plume and even its glow have been easily visible from space. And back on the ground, photographers have already captured some spectacular images of the blaze. The wildfire began at about 3:45p.m. on Tuesday, July, 21, about six miles east of Logan Pass in Montana's Glacier National Park. Lightning is the likely culprit, but a definitive determination hasn't been made yet. It has been burning along the shores of Saint Mary's Lake, west of the town of St. Mary. You can watch the wildfire's birth and initial growth in the animation of GOES-15 weather satellite images above (courtesy of the Cooperative Institute for Meteorological Satellite Studies at the University of Wisconsin). Look for the development of a gray plume of smoke just a little above and to the right of center. (You can also see a smaller plume from another fire to the northwest, across the border in British Columbia, Canada.) Following the fire's birth, gusty winds pushed the flames forward quickly, and also promoted erratic fire behavior. The blaze soon prompted precautionary evacuations inside the park, and in the St. Mary area (which also was evacuated in 2006, when the much larger Red Eagle fire inched to within just a few hundred yards of town). https://twitter.com/PhotosbyPhilipG/status/624618788701364226/photo/1 It's not every day that you can see the glow from a dangerous wildfire competing with the shimmering Northern Lights. But that's exactly what happened overnight on Thursday — as captured by photographer Philip Granrud. The glow was also visible to the Suomi NPP satellite before dawn local time on July 22: 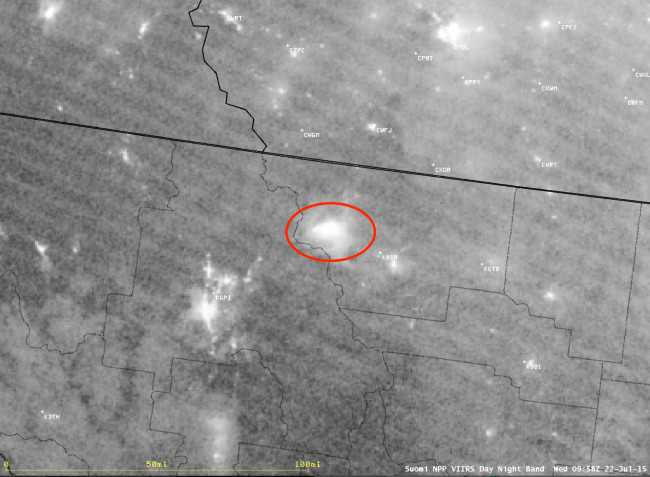 The bright glow from the Reynolds Creek Fire in Glacier National Park is visible from space at night in this infrared image acquired by the VIIRS instrument on the Suomi NPP satellite. (Source: CIMSS Satellite Blog/SSEC—University of Wisconsin/NOAA) In the Suomi NPP image above, I've circled the wildfire glow, which is seen in an infrared image. https://twitter.com/GMIdaho/status/623813120318947329 Since its birth, the Reynolds Creek Fire has been burning along the shores of St. Mary's lake, as seen in the Twitpic above. The Going to the Sun Road, which traverses the park in an east-west direction, and is enormously popular with tourists, parallels the lakeshore. 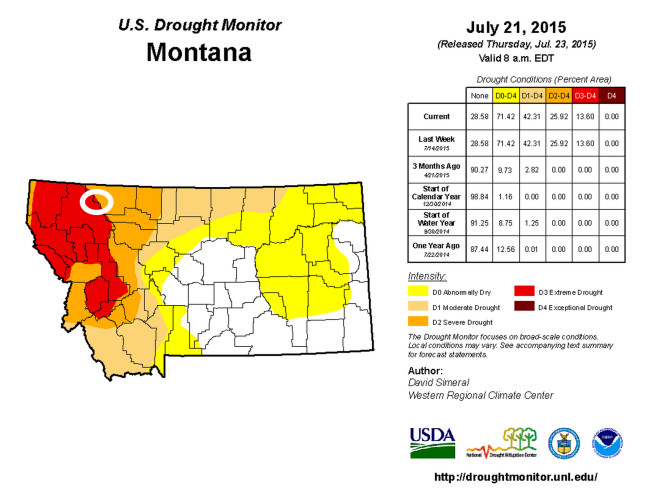 Forty-two percent of Montana is experiencing moderate to extreme drought. The Reynolds Creek Fire is located within the circled area above. Much of Montana is currently in drought. The area where the Reynolds Creek Fire is burning (circled in the U.S. Drought Monitor map above) is on the border between an area of severe (bad) and extreme (worse) drought. As for the West as a whole, more than 60 percent of the region is currently in drought — with the epicenter in California. At least 14 large fires are burning in the West, excluding Alaska. Still more are burning in western Canada. And Alaska — which has been freakishly warm for months — has four large fires.

SEE ALSO: Smoke From Hundreds of Wildfires in Canada Streams South Across Much of the Central United States

Since the beginning of the year, there have been 34,115 wildfires covering 5,583,190 acres in the United States. That's way more than the average for the past 10 years of 43,894 fires covering 3,569,966 acres. (For statistics and other information on current U.S. wildfires, go here.) The next outlook report on significant wildfire potential from the National Interagency Fire Center is due out on Aug. 1. Here's what their previous outlook looked like, published on July 1: 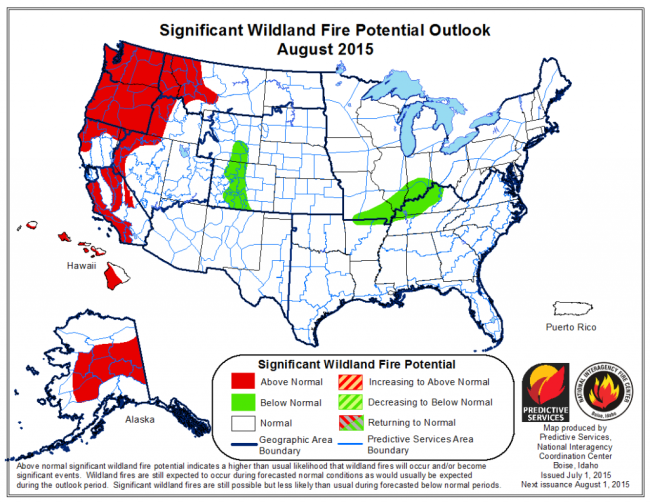 For Alaska, the Pacific Northwest (including the western part of Montana), and significant swaths of California, it doesn't look good.