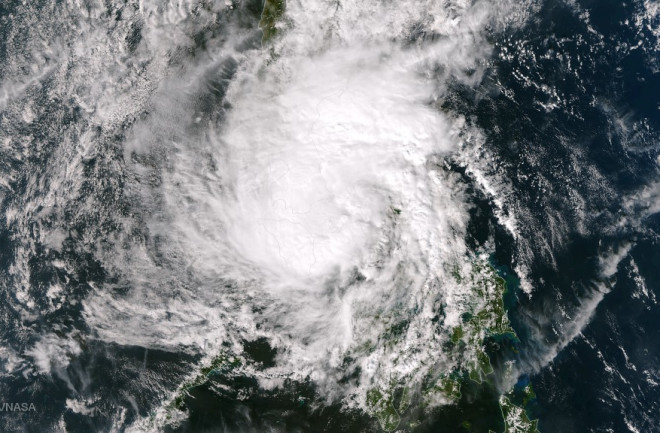 Trophic Storm Hagupit over the Philippine Islands, as seen by the Suomi NPP satellite on Dec. 8, 2014. (Source: NOAA Environmental Visualization Laboratory) Please don't misread my headline. I'm not suggesting that I doubt the seriousness of the challenges posed by climate change — particularly for developing nations — and the pressing need to act. In fact, I'm so concerned that I think it's important to call out hype when I see it — because it could have the unintended effect of undercutting support for action on climate change. The hype I'm concerned about is coming from Greenpeace, which is strongly linking Super Typhoon Hagupit to climate change in an online campaign:

Now it's time for the world's leaders and the media to start calling the problem by its real name: let's name the typhoon after one of the biggest companies making a fortune from killing the climate. The more people vote, the more people will know what we should really be calling this supertyphoon. Vote now to help choose the name of the typhoon and share this with all your friends!

Readers are then prompted to Tweet their favorite. (For the record, as I write this Typhoon Chevron is in the lead.) And that's not all. The Independent is reporting this:

Greenpeace campaigners are planning on traveling to the areas affected by Hagupit as soon as it is safe to do so and 'send a message of devastation' to the Conference of Parties and 'tell them the people of the Philippines should not experience this, Ms Abad said.

The quote comes from Anna Abad, Greenpeace's climate justice campaigner for the Philippines. And the Conference of the Parties is the U.N. sponsored climate change meeting now underway in Peru. First, some facts: Typhoon Hagupit came ashore on Samar Island in the Philippines on Saturday just to the north of where Typhoon Hayan caused unimaginable devastation last year. At landfall, it was rated as a Category 3 storm packing 125 mile per hour winds. Since then it has weakened to a tropical storm. Although not nearly as strong as Hayan, Hagupit has still been a killer: The death toll stands at 21 — and may well rise. (By comparison, Hayan killed more than 6,000 people.) By tying Hagupit to climate change, Greenpeace is stretching the truth — to the extent that I think it does qualify as hype. There is no evidence for a significant trend in the activity and destructive potential of tropical cyclones globally over the past 40 years, as measured by something called "accumulated cyclone energy," or ACE. This is true for individual cyclones and entire seasons. For more information about ACE, see this helpful piece at Weather Underground. And check out this graph by Ryan Maue over at Weatherbell.com showing global ACE values since 1970. Let me know if you spot a trend. I can't. What about the frequency of cyclones? As I pointed out in a post last week, the latest major report from the Intergovernmental Panel on Climate Change found no significant trend:

Greenpeace is careful to say that while "we can't directly attribute any one superstorm to climate change, we do know that the strongest typhoons are getting stronger." That's true, according to the IPCC — in the North Atlantic:

. . . over the satellite era, increases in the intensity of the strongest storms in the Atlantic appear robust (Kossin et al., 2007; Elsner et al., 2008) but there is limited evidence for other regions and the globe. Time series of cyclone indices such as power dissipation, an aggregate compound of tropical cyclone frequency, duration and intensity that measures total wind energy by tropical cyclones, show upward trends in the North Atlantic and weaker upward trends in the western North Pacific since the late 1970s (Emanuel, 2007), but interpretation of longer-term trends is again constrained by data quality concerns (Landsea et al., 2011).

Some of you may be thinking, "Come on Yulsman, you're splitting hairs here. There's a trend in the Atlantic, and a weaker one in a part of the Pacific, so what's wrong with Greenpeace's strategy? First, the truth is simply the truth. To summarize: At the global scale, there is no trend, period. At least not yet. In the Atlantic, there is robust evidence to say that the strongest storms have gotten stronger. But at the same time, none of the last 25 major Atlantic hurricanes have made landfall in the United States — a remarkable lull. Maybe something is going on in the western North Pacific since 1970, but the evidence is limited. All in all, a mixed picture — not one suited for simple sound bites and rousing activism. But that's okay, because there are plenty of compelling arguments to be made for taking action on climate change that do not require hype. It's possible that a strong, unequivocal, long-term trend in cyclone activity linked to climate change will emerge from the noise of year-to-year natural variability. But it hasn't yet. So what will happen if purely because of that natural variability the frequency and intensity of tropical cyclones declines globally, or in the Pacific Ocean specifically, for some period of time? Folks who have heard Greenpeace link climate change and tropical cyclones so strongly might then justifiably dismiss anything else the group has to say about environmental issues. Thus, by engaging in hype, Greenpeace may well be undercutting the climate activist cause. Lastly, hype tends to activate people on opposite sides of the political debate, and alienate the rest of us. We've had lots of this polarization — and it hasn't gotten us any closer to effective global action on climate change.