As El Niño Gets Even Stronger, He's Not Really Looking Like a Child Any Longer — More Like the Monster of 1997/1998

A comparison of sea surface heights and, by extension, temperatures. The left-side measurements come from the TOPEX/Poseidon mission in 1997, while the right side is from Jason 2 in 2015. Comparing the two years, this year seems slightly more intense — for now. (Source: NASA/JPL)

Pulses of unusually warm water sloshing from the western Pacific Ocean toward South America along the equator have caused El Niño to get even stronger in recent weeks.

In fact, conditions in the equatorial Pacific Ocean are looking a bit more intense right now than they did at this point in the summer of 1997, when a true monster of an El Niño was brewing. The animation above compares the evolution of sea surface conditions in 1997 (left) to this year (right), as measured by satellites. Yellow through white in the animations show areas where sea level, and by extension ocean temperatures, were higher than normal. (Areas of warm water stand higher because of thermal expansion.) “We have not seen a signal like this in the tropical Pacific since 1997,” says Bill Patzert, a climatologist at NASA’s Jet Propulsion Laboratory, quoted in a post

today at NASA's Earth Observatory. “It’s no sure bet that we will have a strong El Niño, but the signal is getting stronger. What happens in August through October should make or break this event." Barring something really weird (always possible!), it is looking increasingly likely to be one of the stronger El Niño's on record. That should load the weather dice in a way that would bring at least some of water-starved California a healthy dose of wintertime precipitation. Unfortunately, it could also mean turbulent weather that can include landslide-inducing torrents of rain. You can watch El Niño strengthening in pulses in this animation, based on satellite data from the Jason-2 mission: 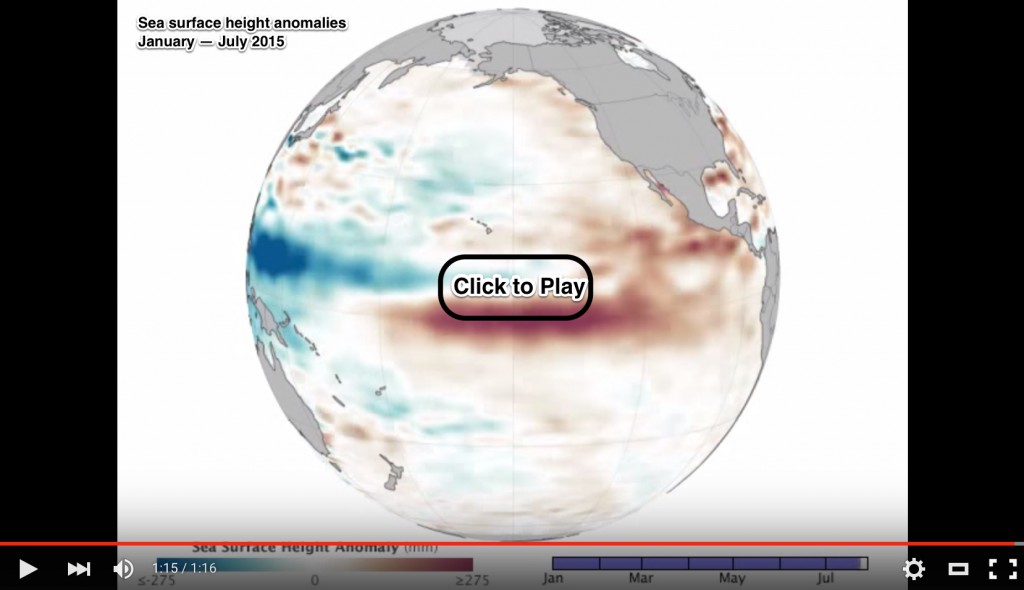 In this animation, shades of red indicate areas of higher sea level as a result of warmer than normal water. (Warmth causes thermal expansion of the water.) Shades of blue show where sea level and temperatures were lower than average. Normal sea-level conditions appear in white. The data come from altimetry measurements made by the OSTM/Jason-2 satellite and analyzed by scientists at NASA’s Jet Propulsion Laboratory. (Source: NASA Earth Observatory The animation runs twice, once quickly, and the second time in slo-mo. If you watch carefully, you should be able to make out a very subtle pulse of higher, and therefore warmer, water moving from west to east across the Pacific Ocean along the equator starting in January. Then there are increasingly stronger pulses in March, May, and finally in July. This is a hallmark of a strengthening El Niño — which, by the way, means "the little boy" (also the "Christ child"). Right now, I'd say he's not looking much like a child. Will he regress or grow even more? Time will tell. No ImaGeo post on El Niño would be complete without some geeky details. (I haven't gotten there yet!) So, to understand what has been going on, consider the winds:

A map of wind anomalies in the equatorial Pacific Ocean. (Source: NOAA) The arrows in the map above show winds blowing anomalously from west to east across the equatorial Pacific from early July to early August. Ordinarily, the trade winds in this region blow in the opposite direction. Bursts of the anomalous westerlies have helped to push those pulses of warm water toward South America, and to dam them up on that side of the ocean basin. Those pulses go by the scientific name of "Kelvin waves." Here's how NASA's Earth Observatory explains

Under normal conditions, the tropics’ prevailing easterly winds push Sun-warmed surface waters across the Pacific from the Americas toward Indonesia, creating a deep pool of warm water in the western Pacific. During an El Niño, the trade winds falter, and sometimes even reverse, for months. When the winds that maintain the warm pool falter, a large pulse of warm water from the western Pacific slides back toward the east.

At the same time, cooler than normal water will be left behind on the western side of the Pacific Ocean. And you can see just that in both of the animations above. | Correction:

In an earlier version of this post I mistakenly credited the animation at the top to the NASA Earth Observatory. That was incorrect. The animation should have been credited to Kristy Kawasaki/NASA/JPL. I am sorry for the error! |