As Earth’s High North Blazes with Intense Wildfires, Europe’s Heat is About to Invade the Arctic 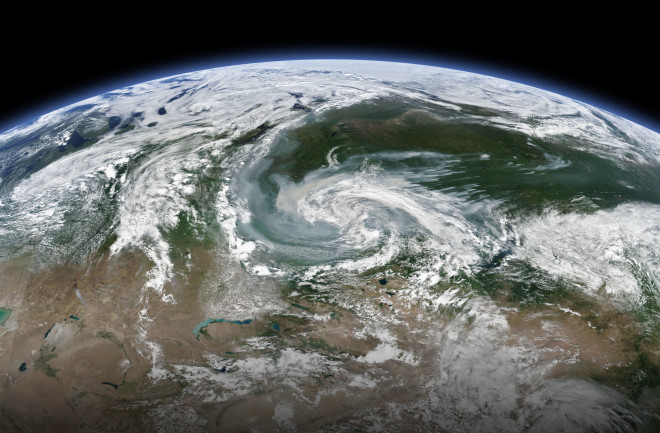 It’s the second heat wave in the region in as many months — and this one has been even more brutal than June’s. As I wrote earlier this week, research shows that human-caused climate change has dramatically upped the odds for extreme heat events like this.

More broadly, July is on track to be the warmest month ever directly recorded on Earth, and 2019 is all but certain to be a top five year.

With all of this in mind, it should probably come as no surprise that a staggering number of intense wildfires have been blazing across vast stretches of Earth’s northern latitudes. Over the last six weeks, the Copernicus Atmosphere Monitoring Service has tracked more than 100 intense and long-lived wildfires in the Arctic.

As a release from CAMS observes, these blazes are pumping an enormous amount of carbon dioxide into the atmosphere — which, of course, only exacerbates global warming further:

In June alone, these fires emitted 50 megatonnes of carbon dioxide into the atmosphere, which is equivalent to Sweden’s total annual emissions. This is more than was released by Arctic fires in the same month between 2010 and 2018 put together.

Add in the CO2 that has been emitted during July and the total may already be double that.

Carbon dioxide is, of course, not the only problem. All that smoke has been contributing to horrible air quality:

That was the situation on the ground in Siberia a few days ago. From the vantage of space, the situation seems no less grim — as the dramatic satellite image at the top of this post suggests.

Quite honestly, I don’t believe I’ve ever seen anything quite like it. I’ve been working with remote sensing imagery for decades, so that’s saying quite a lot.

The image shows wildfire smoke being sucked into and around a sprawling low-pressure system on July 21, 2019. According to one estimate, the smoke went on to cover a mind-boggling ~1.7 million square miles. That’s more than half the size of the United States.

Make sure to check out the distinct plumes of smoke visible on the right side. These plumes are being pulled to the southwest and into the giant vortex, where they’re mixing with smoke from other fires, as well as the storm’s clouds.

This weather system has been lingering over northern Russia for many days. On satellite imagery, I see it forming up on July 20th. And as the following image shows, its remnants were still hanging around as of yesterday — as were thick, expansive palls of wildfire smoke:

The Suomi NPP satellite captured this image of a broad swath of Russia blanketed by wildfire smoke on July 25, 2019. The red dots show where the satellite detected heat from wildfires. (Credit: NASA Worldview)

The storm system has all the hallmarks of a cut-off low — a low-pressure system that has become disconnected from the main westerly flow of air. In this case, the jet stream split into two branches over Russia, one north and another south, with the cut-off low swirling in between for days.

The circulation over Siberia doesn’t exist in a vacuum. It is connected via the jet stream to the big atmospheric blocking pattern that has resulted in Western Europe’s current heat wave.

The Suomi NPP satellite captured this image of a broad swath of Russia blanketed by wildfire smoke on July 25, 2019. The red dots show where the satellite detected heat from wildfires. (Credit: NASA Worldview)

Zooming in now, the animation above shows three views from the Sentinel satellite of one of the Siberian blazes.

One image in the animation views the fire in visible wavelengths of light. This gives a particularly compelling view of the smoke. Another is an infrared view, picking up the heat signature from the fire. And the third combines both visible and infrared data, showing smoke billowing from the blaze as well as heat from its flames. (I want to give big shout out here to satellite visualization wizard Pierre Markuse for the images in the animation!)

Meanwhile, half a world away, wildfires are also ablaze across a large portion of the high latitudes of North America.

Wildfire smoke stretches across thousands of miles of North America’s high north on July 23, 2019, as seen in this image from the Suomi NPP satellite. (Credit: NASA Worldview)

As you can see in the image above, we’re talking thousands of miles!

The natural color image was acquired by the Suomi NPP satellite three days ago. I’ve circled a bluish pall of smoke stretching all the way from Alaska to the Great Lakes.

The map above shows the full extent of the smoke across both both North America and Eurasia. And here’s another remote sensing view, this one tracking the pollutant carbon monoxide produced by wildfires, as well as industrial sources:

Unsurprisingly, wildfire activity in the Arctic is highest during the warmest months of June and July. But what we’ve been seeing this year has been particularly unusual, according to Mark Parrington, senior scientist with the Copernicus Atmosphere Monitoring Service.

That makes sense, he says, because “temperatures in the Arctic have been increasing at a much faster rate than the global average, and warmer conditions encourage fires to grow and persist once they have been ignited.”

This map shows how temperatures around the globe differed from the 1951-1980 average. (Credit: NASA GISS)

This is borne out by the map above from NASA’s Goddard Institute for Space Studies. It shows that most of the globe was unusually warm during April through June of this year — and none more so than the high northern latitudes, including Alaska and Siberia.

Now, as the heat dome that baked France and other parts of Western Europe shifts north, a large portion of the Arctic is forecast to get blasted by even more unusual warmth.

Already, temperatures are reaching into the 90s in Scandinavia — which is extremely unusual. And over the next few days, a blocking ridge of high pressure is forecast to set up over the North Atlantic and then Greenland, bringing very warm temperatures.

This could result in significant melting at the surface of the ice sheet, as well as pronounced shrinkage in the extent of Arctic sea ice — which is already flirting with record lows for this time of year.

I’ll be keeping an eye on what happens, so I’ll hope you’ll check back here at ImaGeo.