As a heat wave builds, dozens of wildfires are burning across nearly a half million acres of the U.S. 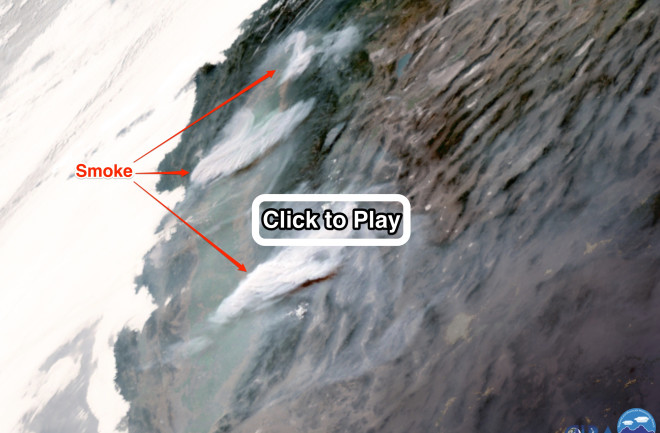 An animation of GOES-16 weather satellite images shows thick plumes of smoke billowing from wildfires in California on June 24 and 25, 2018. (Note: When you click on the image, you will be taken to another website to watch the animation. It may take a little time load properly. Source: RAMMB/CIRA) As I'm writing this Wednesday, June 27, 51 large, active wildfires are burning on more than 450,000 acres in the United States, most of them in western states and Alaska. That's an area more than twice the size of New York City. Overall, 2.2 million U.S. acres have already been scorched in just the first half of the year. That's approaching the long-term average for an entire year. (For the latest statistics on large U.S. wildfires, go here.) The animation above shows smoke from several wildfires burning in California. The biggest is the Pawnee Fire near Clear Lake north of the San Francisco area. (In the screenshot, it's indicated by the middle arrow.) The Pawnee Fire is now at 13,500 acres, with 25 percent containment today, up from just five percent yesterday. "The fire is being driven by low relative humidity, erratic winds, and above normal temperatures," according to the California Department of Forestry and Fire Protection. Twenty-two structures have been destroyed so far, including 12 homes. Some 600 additional structures are threatened. And things have really only begun to heat up. Literally. Here's what's building right now:

A major heat wave is building. (Source: Climate Reanalyzer) Those orange tones show how much average temperatures at two meters above the surface are forecast to exceed average over 10 days, as of today. And here's how maximum temps over the next 10 days are expected to look:

Source: Climate Reanalyzer I don't think I need to write a caption for that. What's brewing is pretty obvious: HOT HOT HOT... Research has shown that wildfire activity in the western United States increased abruptly in the mid-1980s, and that the number of large forest blazes and the area burned have continued to increase. A warming climate and earlier snowmelt seems to be strongly associated with these trends. But when it comes to risk, this is just part of the equation. The other part is the continuing rise in the number of people who choose to live in fire-prone areas.