As a giant cruise ship prepares to set sail, the fabled — and treacherous — Northwest Passage is nearly ice free

The 1,070 passengers scheduled to sail aboard the Crystal Serenity have global warming to thank for shrinking Arctic sea ice

On August 9, 2016, the VIIRS instrument aboard the Suomi NPP satellite captured this image centered on Canada featuring a nearly ice-free Northwest Passage. (Image: NOAA. Animation: Tom Yulsman) The largest cruise ship ever to attempt a complete transit of the usually ice-choked waters of the famed Northwest Passage is just days away from weighing anchor. And at least for now, it looks like the coast is almost clear for the Crystal Serenity with its 1,070 passengers and 655 crew members. As of Aug. 11, 2016, sea ice is nearly gone from the southern route of the passage, according to NOAA. 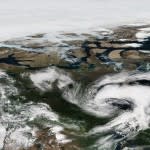 Click to enlarge. The animation at the top of this post shows the mostly ice-free route, as seen by the Suomi NPP satellite on August 9th. Have a look to get your bearings, then click on the thumbnail at right to see the full-sized, unannotated version. (Click it again to zoom in so you can explore the route I've marked in the animation.) Sea ice has long stymied mariners from completing the journey across the treacherous northernmost reaches of North America. The first documented full transit of the Northwest Passage was made by Roald Amundsen in a small, wooden boat between 1903 and 1906. Since then, his journey has been repeated fewer than 240 times. The Crystal Serenity, owned by Crystal Cruises, is scheduled to sail from Anchorage on August 16 and make 12 stops during its journey, ending in New York City on September 17th. "While we've had smaller, 250- to 350-passenger cruise liners that have gone across the Northwest Passage, this is certainly the largest one we've had," said U.S. Coast Guard Rear Admiral Daniel Abel at the Global Leadership in the Arctic conference last year. 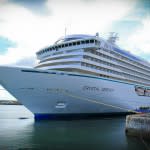 The Crystal Serenity. (Photo: John Hughes via Flickr Creative Commons) Although the lack of sea ice may be encouraging for the passengers and crew of the Crystal Serenity, their journey will not be risk-free. Far from it. The crew will have to thread the nine-deck, 68,000-ton cruise ship through narrow, shallow channels, and navigate across waters that still remain uncharted. They'll also have to contend with fickle, possibly nasty weather. Throw in some unpredictable winds that can push sea ice into the ship's path, plus icebergs calving from glaciers, and you've got a fairly large maritime challenge. And that's not all. As of Aug. 11, 2016, there was still some sea ice clearly floating in the way. I've circled it on the map below, which shows sea ice extent, as determined using data from multiple sensors: 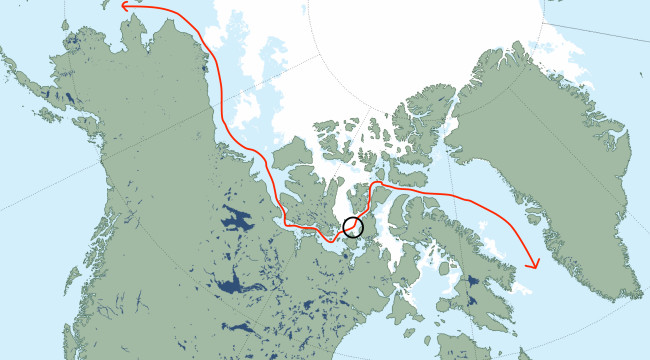 A map of sea ice extent as of Aug. 11, 2016 shows a largely — but not totally — ice-free path through the Northwest Passage, which I've marked in red. (Map: National Snow and Ice Data Center) The U.S. Coast Guard has been working with Canada and the Arctic Council to plan for the journey, including ways to mitigate risks and handle any emergencies that might come up. The Serenity will have an escort vessel with her. "It will be ice-breaking capable, it will have a helicopter embarked, it will have additional safety equipment," said Rear Admiral Abel at the Arctic conference. "So we're looking to make sure on the prevention side that she's got everything she needs so that we don't need to worry about the response side." "It keeps me up at night," added Coast Guard Vice Commandant Charles D. Michel. "As a coast guardsman, I don't want to repeat a Titanic. We need to make sure that we think this through and get it done correctly. This is a complex operation, in a very environmentally sensitive, and frankly navigationally difficult area. And the weather's incredibly treacherous up there, logistics very difficult to deal with. This is a very tough nut for us to crack. But I think we've got the right people in the room to try to get this done in a safe and manageable fashion." With some ups and downs over the months and years, the extent of Arctic sea ice has been on a long-term decline, thanks to a warming climate. "As of 2015, the downward trend for the summer minimum in September was 13.4 percent per decade relative to the 1981-2010 average," according to NOAA. "Summer ice declines have been especially rapid since 2001." After a record low sea extent for the end of winter set last March, declines have slowed this summer. Even so, when the summer minimum is reached this coming September, it is still very possible that sea ice extent will be among the lowest ever recorded since satellite monitoring began in 1979. As the Coast Guard's Charles Abel puts it, the Arctic "is a very dynamic environment that's frankly changing with increased human activity, with all the things that come along with that."