Art of the Anthropocene: The Scythe 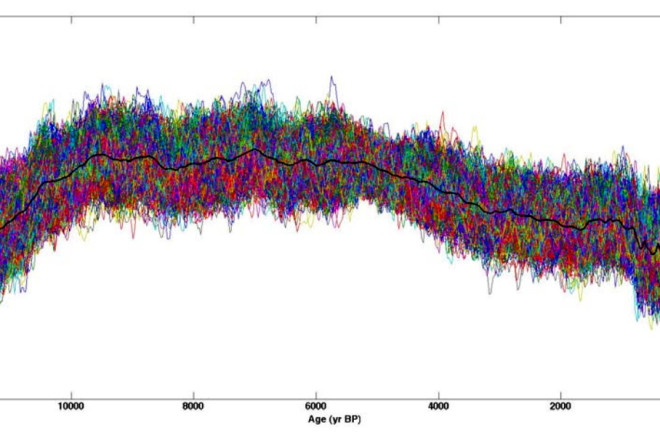 This graph shows how temperatures have departed from the long-term mean over more than 11,000 years. The present time is at the right. The different colored lines are the result of a technique for dealing with uncertainty in data called Monte Carlo simulation. (Image: Science/Shaun Marcott, Oregon State University) NOTE: Updates below include clarifications that Shaun Marcott, the lead author on this research, wants to make. The graph above, based on new research showing how global temperatures have changed since the last Ice Age, has gotten some attention in recent days. — because it shows how the warming of the last hundred years has been unprecedented in its abruptness, and almost so in its degree. Part of the reason is that when the research was first published, scientists were quoted as saying that the data showed how the global temperature increase of the last hundred years has been unprecedented in its abruptness  has happened a lot more rapidly than warming over the previous 11,000 years. (For an example, see comments from Candace Major, program director in the NSF's Division of Ocean Sciences, which funded the research.) It turns out that the issue is complex and requires a bit of explanation. But more about that below. First, I decided to post this graph mostly because I think it is an exquisite example of an emerging genre that might be called the "art of the Anthropocene." And that's what I'd like to focus on here. Much has been written about this "new hockey stick" graph, or "scythe," resulting from research published last week in the journal Science. But not much that I've seen approaches the subject from the visual perspective. The graph was buried deep in the supplementary materials accompanying the paper by Shaun Marcott of Oregon State and his colleagues. Just what exactly are you looking at? Marcott reports that some news reports have answered that question incorrectly. So if you've already seen this image, keep reading... Using fossils of tiny organisms contained in cores of seafloor and lake sediments, he and his colleagues gauged past temperatures going back to the end of the last ice age — much further than other reconstructions using records like tree rings. These samples came from 73 sites around the world. But there was a challenge they had to overcome: Each one of those 73 records had a degree of uncertainty associated with it — uncertainty in the temperature data and also when, exactly, the fossils were deposited. The graph was an attempt to deal with that. To understand how, let's start with the basics. The vertical axis of the graph shows how temperatures have departed from the long-term average, according to those 73 records. And the horizontal axis shows time, from more than 11,000 years ago on the left, to the present on the right. What's that colorful spaghetti about? As Marcott puts it:

Each color represents one realization (or simulation, or calculation) of the global temperature reconstruction from our study. In this plot there are 1,000 of those realizations, which are based on all 73 of the datasets.

But if there were only 73 datasets, what are those 1,000 "realizations"? To figure out the range of possibilities given the uncertainties in the data, Marcott and his colleagues used a method called Monte Carlo simulation. Here's how he explained it to me in an email message:

How do the Monte Carlo simulations come into all this? Each record has some uncertainty associated with the temperature and with the chronology (the time component, typically associated with radiocarbon dating). For each realization, all 73 records are allowed to vary independently within their stated uncertainties. And after allowing them to vary within that uncertainty, we averaged them together to produce a global temperature reconstruction. This was done one thousand times in this case to produce the plot you see.

I know. If you're like me, you find it a little difficult to wrap your head around. But that's the beauty of the visual. It gets across the basic idea. Given the known uncertainties in the data, the colored lines represent all the possibilities. And they sketch out the bounds within which temperature has varied over time in these records. For me, at least, the result is indistinguishable from art. The spike on the right represents the warming that has occurred since the Industrial Revolution. The suddenness of the rise compared to past changes in temperature is seems obvious — and unprecedented in this record. But since I wrote the first version of this post, Marcott has cautioned me that the graph does not really show that. Here's a relevant section from an email he sent me to clarify the significance of the work:

We cannot say whether this change is unique across the entire Holocene because of the resolution (i.e., the sampling of temperature per unit time) of the entire dataset is about 120 years, and the nature of the Monte Carlo simulations smooth everything out to less than about 300 years. [So] it would be incorrect to say the rate is greater than anything else seen in the past 11,000 years. When looking at our reconstruction of temperature it appears this way. [But] it is, in fact, just a resolution issue related to this dataset.

Jeremy Shakun of Harvard, one of Marcott's co-authors on the paper, made this comment recently on Andrew Revkin's post at DotEarth about the research:

Just a quick point here. I state in the interview that we can't be sure there aren't any abrupt global warming blips during the Holocene similar to the current one due to chronological uncertainties and the relatively low time resolution of our global temperature reconstruction. It is worth considering though that we do have several high resolution proxy climate records from various regions around the world (think ice cores), and if abrupt global warming events happened in the past, then we might expect these local records to show them.....but my sense is they don't. So, this isn't hard and fast proof that there weren't any abrupt global events like today during the rest of the Holocene....but if I had to lay down a bet, it might make me place my wager on that side of the argument.

Lastly, I want to point that while the graph shows that it has been as warm in the past as it is today, it seems obvious that we will probably be heading soon into unprecedented territory, with no caveats necessary.