Art of the Anthropocene: The Bakken 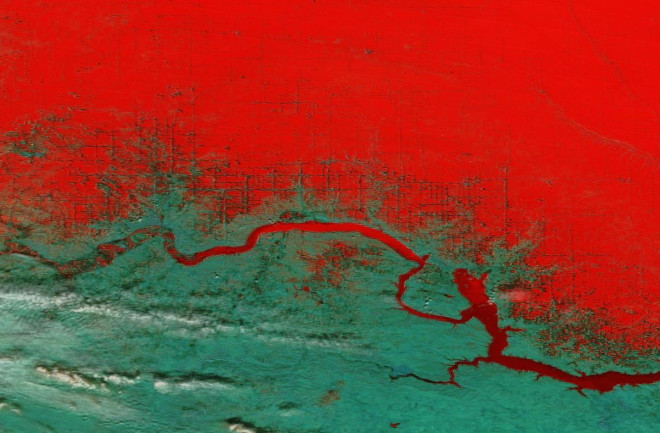 Part of the Bakken oil region is seen in this false color image from NASA's Terra satellite, captured on April 2. The red tones are indicative of snow cover. A network of roads criss-crossing the region is visible — used by many thousands of trucks employed in servicing the oil fields.

The Bakken formation in North Dakota and Montana has helped spark a "peak oil is dead" meme in the media and elsewhere. There are reasons to believe that this latest fad is as overblown as the peak oil frenzy was in the mid-2000s.

But one thing is clear: The Bakken is a big producer of oil. As of February, the formation was producing 673,015 barrels of black gold each and every day, making it one of the most productive oil regions in the United States.

And the official daily production may actually be underestimated. Some private estimates peg it at more than 800,000 barrels per day, with a million barrels coming in just a few years. Of course, that would just deplete the resource faster (and I haven't even mentioned climate change). But I digress...

My point here is to show, with some help from a compelling graphic, that all that industrial activity is leaving its mark. It is, in fact, visible from space — at night. But I wanted to focus on something with greater aesthetic value.

A map of the Bakken formation. (Click to enlarge. Image: EERC)

The image at the top of this post shows a portion of the Bakken region in North Dakota, centered on the Missouri River. Captured by NASA's Terra satellite on April 2, it's in false color. (So relax, you're not suffering a flashback.) It looks to me like a canvas, and another example of unintended Anthropocene art. The red is indicative of snow and ice. The Missouri River is visible snaking across the middle of the frame. And the thing that looks like a salamander is Lake Sakakawea, a reservoir.

Look to the north of the river and you'll see a cross-hatching pattern etched into the red. These are north-south and east-west roads.

According to a story by Chip Brown in the New York Times Magazine, "A decade ago you could have spread a picnic blanket on a lot of back roads in western North Dakota and safely taken a nap." Today if you tried that stunt you'd be flattened into a human pancake in no time. Every new well in the Bakken requires some 2,000 truck trips during its first year of operation. And by last count, there were 5,161 wells producing oil — up from just 193 ten years ago.

That's a whole lot of trucks coursing up and down back roads.

The Bakken Formation is the largest continuous oil resource in the lower 48 states, according to the Energy and Environmental Research Center of the University of North Dakota. Given that, my guess is that concerns about climate change notwithstanding, we're going to continue drilling the hell out of the Bakken. So don't plan on picnicking on any North Dakota back roads this summer.