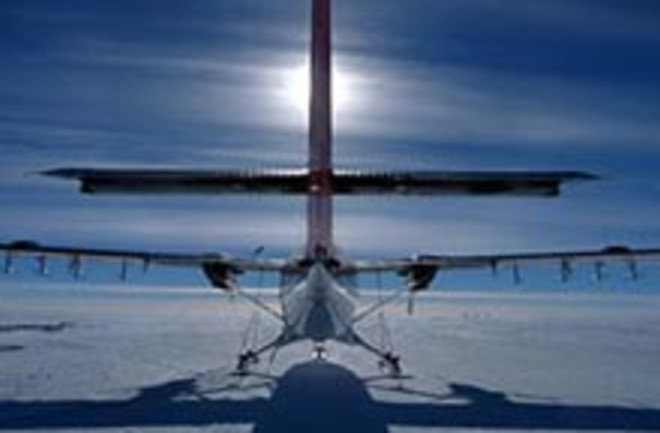 Antarctic researchers have succeeded in mapping a mountain range that is as tall and impressive as the Alps and yet invisible to the naked eye, since the entire range is hidden beneath miles of ice. The international expedition (which 80beats covered when it set off in October) used radar, gravity sensors, and other instruments mounted on airplanes to chart the contours of the mighty Gamburtsev mountains, but say the results mostly revealed new mysteries. For example, researchers expected to see a plateau formation, indicating that the peaks had been worn down over millennia. Instead, says researcher Robin Bell:

"They are incredibly rough mountains — they look like alligators' teeth" [Nature News].

"The surprising thing was that not only is this mountain range the size of the Alps, but it looks quite similar to the (European) Alps, with high peaks and valleys," said Fausto Ferraccioli, a geophysicist at the British Antarctic Survey.... He told Reuters that the mountains would probably have been ground down almost flat if the ice sheet had formed slowly. But the presence of jagged peaks might mean the ice formed quickly, burying a landscape under up to 4 km (2.5 miles) of ice [Reuters].

Researchers say that understanding the behavior of polar ice sheets is crucial to scientists trying to predict the impacts of global warming. Another mystery is the age of the mountains. Mountain ranges like the Alps and the Himalayas formed when continental plates collided, but this

range sits in the middle of an ancient chunk of crust, where geologists had thought there had been no major tectonic activity for at least 540 million years.... If the range is indeed at least 540 million years old, then it is remarkably well preserved for its age. Another possibility is that the Gamburtsevs formed much more recently, as a result of volcanic activity. But preliminary results from the expedition don't show the large magnetic anomalies that would typically be expected when flying over volcanic terrain, says Ferraccioli [Nature News].

To conduct the study, researchers