Thanks to human-caused warming, an area of ice three times the size of Texas went missing this year. 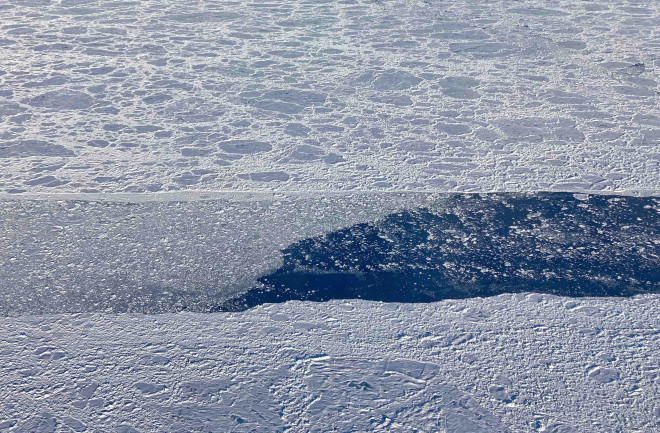 This photo, taken during a NASA Operation IceBridge flight on September 9, 2019, shows an opening in the sea ice cover north of Greenland. This lead is partially filled by much smaller sea-ice rubble and floes. (Source: NASA Earth Observatory)

Thanks to human-caused warming, an area of ice three times the size of Texas went missing this year.

Arctic sea ice shriveled so much during this summer’s now-finished melt season that it has reached the second lowest extent on record.

A sensitive indicator of human-caused warming, the low extent of the region’s floating lid of ice effectively tied with 2007 and 2016 for second place in satellite records extending back 40 years, according to the National Snow and Ice Data Center.

“Why three ties? It’s probably just blind dumb luck,” says Mark Serreze, Director of the NSIDC. “But clearly the ice is not recovering.”

The extent of the ice on Sept. 18, when it reached its minimum, was 811,000 square miles below the long-term average. That area of missing ice is about three times the size of Texas.

Arctic sea ice entered the melt season this year in very sorry shape — and then its drop became downright vertiginous.

During April, and late July through much of August, the ice extent tracked at record lows.

“At the beginning of August, we were at record low ice levels for that time of the year, so a new minimum record low could have been in the offering,” said Walt Meier, an NSIDC sea ice researcher, in a statement.

To break the previous record, the ice extent would have had to plunge even lower than it did in 2012. That year, a powerful cyclone during August smashed the ice cover, helping to accelerate the melting and driving the ice extent to a shockingly low level.

During this year’s melt season, temperatures ran at 7 to 9 degrees Fahrenheit above normal, making it quite vulnerable to another cyclone. But one never materialized, and starting in late August, significant shrinking of sea ice actually stalled.

Heading into September, variable winds at times nudged the ice cover southward, increasing its overall extent, and at other times pushed it northward, decreasing it. This kind of variation is normal as the melt season inches toward a close.

Finally, on Sept. 18, with the setting sun and falling temperatures, ice extent began its inevitable seasonal increase. Unless something unusual happens, the ice should expand through autumn and winter until it reaches its maximum in about mid-March.

Warming caused by human activities has affected the Arctic more intensely than any other region on Earth, a phenomenon known as “Arctic amplification.”

“The Arctic is leading the show,” says the NSIDC’s Mark Serreze.

This phenomenon is expected to continue pummeling Arctic ice in coming decades. “We are headed for a seasonally ice free Arctic Ocean,” Serreze says. (For scientists, that means less than a million square kilometers of ice cover.)

Exactly when that might happen is difficult to predict. But according to recent scientific projections, given our current course it could happen some time during the 2050s.

“It could be earlier than that. Some of it depends on us,” Serreze says.

Already, the shrinking sea ice has opened the region to shipping and increasing interest in its significant reserves of oil and gas. Of course, burning those fossil fuel resources would spew yet more carbon dioxide into the atmosphere, intensifying the warming.

Note: As Director of the Center for Environmental Journalism, I am employed by the University of Colorado — home of the National Snow and Ice Data Center. But my journalistic work, including coverage of science coming out of the NSIDC, is guided by the journalistic principles of independence and verification.