Arctic Prospectors Search for Bio-Gold in Them Thar Waters 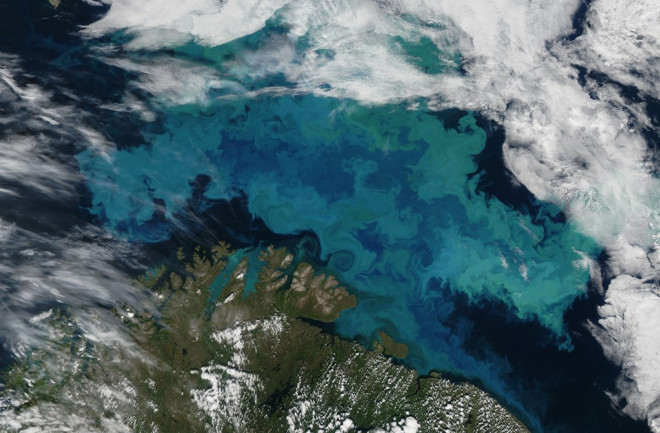 A massive bloom of phytoplankton in the Barents Sea off Norway's coast, as seen by NASA's Aqua satellite in August, 2011. (Source: NASA Earth Observatory) The brilliant blue and green stuff seen in the satellite image above is just algae. But to a new breed of prospectors, it could be even more valuable than gold. These prospectors have nothing in common with the mountain men of the past who wielded dynamite and pickaxes to pry precious metals from the rocks. Instead, they can be found wearing white lab coats and overseeing the hypnotic movements of a robotic arm wielding pipettes and trays of liquid-filled vials.

Sea anemone at Norway's Centre for Marine Bioactives and Drug Discovery. (Photograph: © Tom Yulsman) They are seeking a kind of biological gold — molecules produced by Arctic algae, seafloor animals, and sea-sediment bacteria that could provide the basis for new medicines aimed at combatting cancer, diabetes, heart disease and a host of other ailments. The field is called "bioprospecting." While it isn't exactly new — people have been seeking bioactive compounds from land plants for decades — researchers here in Tromsø, Norway, have extended it into Arctic waters. Many marine organisms like the sea anemone above produce a host of different defensive molecules in order to survive — "to protect themselves against bacteria, for example," says Trond Ø. Jørgensen, Director of the Centre for Marine Bioactives and Drug Discovery, or MabCent, at the University of Tromsø. Other molecules may repulse predators, paralyze prey, or provide an advantage against competitors for food and space. To be protective, such molecules are bioactive, meaning they can have a wide range of potent biological effects. For example, some have been shown to inhibit the growth of cancer cells, others to combat bacteria or viruses, and still others to either activate or dampen immune cells. Some of these molecules have already been used in the formulation of new drugs. For example, an extract from a marine sponge led to the anti-viral drug Vidarabine, or Ara-A, used to combat herpes simplex virus. Similarly, the active compound in the anti-HIV drug AZT was based on chemicals also produced by marine sponges. As of 2011, six marine derived drugs were approved by FDA and one by the European Union. Another 13 were in various stages of clinical trials.

Trond Ø. Jørgensen with organisms collected by MabCent bioprospectors in Arctic waters. (Photo: © Tom Yulsman) Jørgensen and his fellow researchers at MabCent hope that the Arctic will provide a particularly large bounty of useful bioactive compounds. In the frigid waters of the Arctic, he explains, organisms produce bioactive molecules very slowly, and so their concentrations tend to be very low. This means these compounds have to be particularly potent in order to provide an adaptive advantage to the organisms that produce them. "They are super-molecules because they are successful," Jørgensen says. The most exciting development of the past two years at MabCent, he says, is the characterization of a molecule from an Arctic sponge that inhibits development of the atherosclerotic plaques that clog coronary arteries, causing heart disease. "When you feed a mouse with that molecule it inhibits plaques by 70 percent," Jørgensen says. The molecule has been patented by industrial partners and is in testing. But it could take another 10 years before research shows whether it could be a safe and effective drug. Overall, 60,000 bioactive molecules have been found in the sea so far. MabCent researchers have analyzed more than 25,000 compounds from 140 different marine organisms in the Arctic. Of the numerous bioactive molecules they've found, about 20 percent have been novel, meaning they have never been seen before. When a novel bioactive compound is found, "we use it as a scaffold," according to Jørgensen. We add molecules to it to produce higher activity, or lower toxicity, and to make it more targeted." By filling up the scaffold in different ways, the researchers can make variants. "Then we go back to screening to see which one works best." Not all of the research is directed at drug discovery. Bioprospectors have also been looking for species of microalgae that produce particularly high amounts of fats, or lipids. These could potentially provide the basis for biofuel alternatives to conventional fossil fuels, and also for lipids for aquaculture and human consumption.