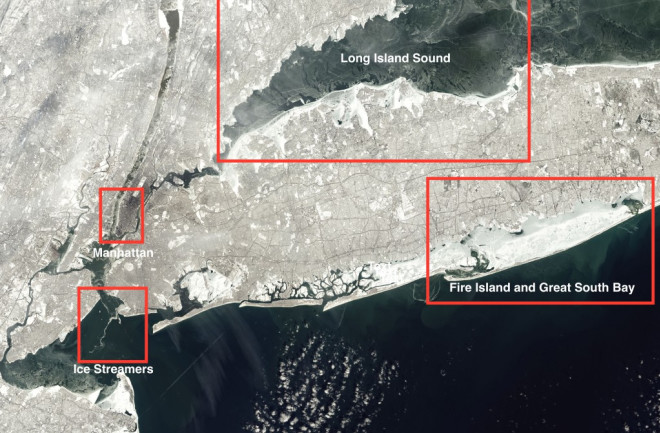 Ice chokes the waters around New York City and Long Island, as seen in this Landsat 8 image acquired on Feb. 24, 2014. The annotated areas correspond to images below. (Source: NASA Earth Observatory) The Arctic invasion that has gripped so much of the United States for so long has turned the waters in and around New York City into something resembling the winter shores of Qaanaaq, Greenland. Well, I guess that's an exaggeration. But when I went to NASA's Earth Observatory today and saw satellite images of the ice choked waters around Gotham, the first thing that came to my mind was the floating sea ice off Greenland. As the Earth Observatory observes, "Baby It's Cold Outside":

The eastern half of the United States has been trapped in a deep freeze for most of February 2015. Hundreds (maybe thousands) of records have been set for daily low temperatures, and wave after wave of ice and snowstorms have hit the region. The coldest days of the year usually occur in January, yet February 2015 has been exceptional in many places.

The cold in the East contrasts with unusual warmth in the West, including in Alaska, where numerous warm temperature records have been set. Click the thumbnail at right to see this remarkably persistent pattern, tied in large measure to a very wavy jet stream. The map shows how temperatures have departed from the long term mean between January 28 and February 26. The images featured by NASA's Earth Observatory today cover a range of locations, including the Buffalo, N.Y. area, Cape Cod, and Delaware Bay. Since I'm originally from New York, I thought I'd focus on that area. I took a broad overview of the region acquired by the Landsat 8 satellite on Feb. 24, 2014, and selected specific areas to highlight in closeup views. The original image is above, and I've keyed it to the closeup views below. Note: Because many of these were fairly extreme crops, I applied some sharpening effects using Photoshop. Also, some of these images are best viewed really big, as opposed to the views you'll get in the default pop-up windows. So make sure to open them in a separate tab or window. (In Chrome, control-click on an image to launch a menu that will give you that option.) Long Island Sound:

Source: NASA Earth Observatory Long Island Sound between Connecticut and Long Island is remarkably choked with floating ice, as seen here. I'm guessing that the long, relatively straight lines that crisscross parts of the image are areas where boats have sliced through the ice. But I don't know for sure. Here's a view from the shore of the Long Island Sound:

Next up, an extreme closeup of Manhattan:

Source: NASA Earth Observatory You're looking at what the Arctic invasion has done to the waters bordering Manhattan Island. The image shows Manhattan from the southern part of Central Park down to the Battery, which is at the southern tip of the island. The Hudson River is on the left (west), and the East River on the right. I lived in New York for about half of my life, and I can tell you that I don't recall ever seeing anything like this. The ice floes in the Hudson are amazing. Here's a photo of what it looks like on the water just off the southern tip of Manhattan:

Wind, currents, and tides conspire together to make beautiful patterns in the ice, as seen in this closeup:

Source: NASA Earth Observatory The image above shows floating ice streaming across Lower New York Harbor, south of the Verrazano Bridge connecting Staten Island on the left with my home town, Brooklyn, on the right. The ice streamers appear to be flowing out from near the tip of Coney Island in Brooklyn.

The Statue of Liberty, which is north of the Verrazano Bridge (off the image) rises from the floating ice in the Twitpic above. Now we're going to head out east along the south side of Long Island. Here, the coast is graced by long, narrow barrier islands. The image below focuses on Fire Island, which is separated from Long Island by Great South Bay:

Source: NASA Earth Observatory If you click on the image to enlarge it (or even better, open it in a new window and click again to see it full sized), you can make out Fire Island stretching diagonally from lower left to upper right. The Great South Bay seems to be completely choked with ice.

The Twitpic above shows what it looks like along the shore. Will the Arctic invasion last? Over the next seven days, the pattern of warmth in the West and cold in the East is forecast to reverse — and then reverse again. You can see the seven-day forecast in three-hour increments at the spectacular Climate Reanalyzer site. Choose North America and Air Temperature Anomaly. Lastly, despite the frigid temperatures in the eastern half of the U.S., the Northern Hemisphere's wintertime pool of cold air has actually be shrinking. As the Washington Post's Jason Samenow puts it in this excellent post, "This winter (2014-2015) is on track to see the most depleted cold air supply ever measured." It's another clear symptom of global warming caused by human activities.