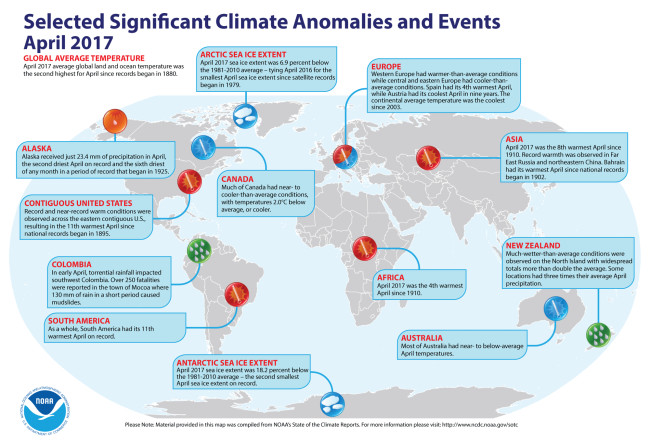 To find a month when the global average temperature over the land and oceans was below average, you have to go all the way back to December 1984, according to the latest monthly analysis from the National Oceanic and Atmospheric Administration. Including April 2017, that makes it 388 straight months in which the global temperature has been warmer than the 20th century average. Like NASA's independent analysis released earlier this week, NOAA finds that last month was the second warmest April in records dating back to 1880. SEE ALSO: The heat goes on: this past April was second warmest in records dating back to 1880 — as were February and March From NOAA's monthly global climate report, released today:

As the following map shows, there were some regions of the globe that experienced cooler than normal temperatures in April: 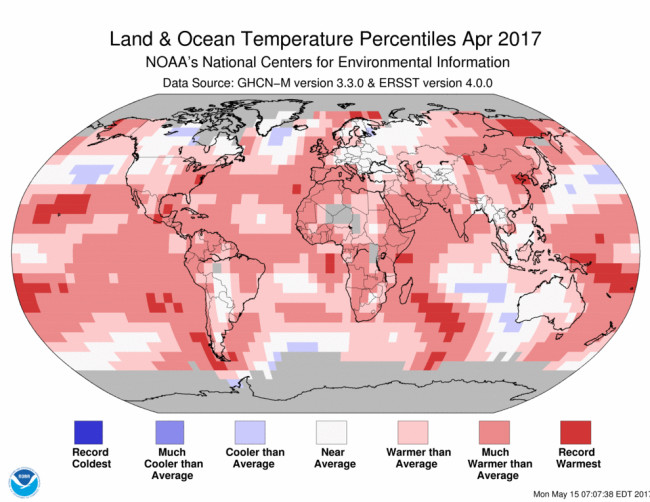 Most notable, according to NOAA, was northern Canada. Here temperatures were 3.6°–5.4°F below average or lower. Even so, no land areas of the globe experience record cold in April. Over the long run, human-caused global warming has loaded the dice, making unusual warmth much more likely than unusual cold. And that has had palpable impacts. For example, between 1951 and 1980, much less than 1 percent of the Northern Hemisphere's land areas experienced extreme heat during summer. By the first decade of the 20th century, extreme summertime heat typically was covering 10 percent of the land areas.