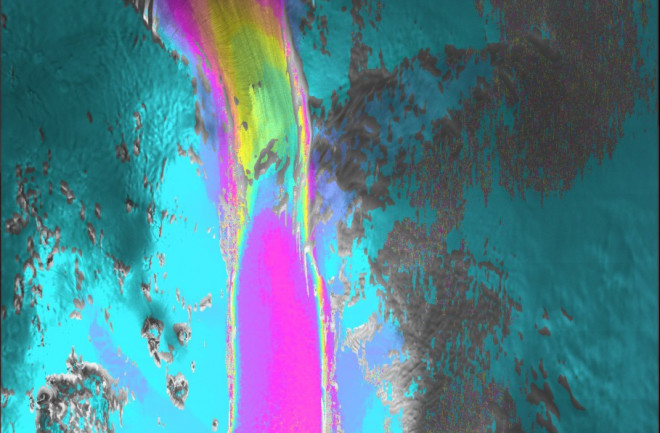 Satellite radar data reveal the speed of flow of the Pine Island Glacier in West Antarctica between March 3 and 15, 2015. Pink indicates the fastest flow: about 100 meters (328 feet). Yesterday, I posted a story about the Halley Research Station on Antarctica's Brunt Ice Shelf. I titled it a "Winter Postcard from Antarctica," and it included photos and comments about life at the station from Tom Welsh, the wintertime manager there. Well, I was so busy putting that post together that I missed the big news yesterday about Antarctic ice shelves in general: They are thinning faster than previously thought. This is a big deal because these ice shelves act like dams that impound giant glaciers behind them, slowing their movement to the sea. So as these ice shelves erode, it allows the glaciers to flow more quickly, releasing more ice into the sea and thereby raising sea level. The new findings have been reported widely elsewhere, including this excellent overview by Andrew Freedman at Mashable. So I won't go into them in great detail here. But I thought I'd share a quick summary as well as some imagery that can help explain what's going on. The new research, published on March 26, 2015, in the journal Science, is based on a new high-resolution record of ice shelf thickness based on satellite radar missions of the European Space Agency from 1994 to 2012. The study showed that from 1994 to 2003, total ice shelf volume in Antarctica changed very little. But then it went into rapid decline. There was one exception to this pattern — and it was not a good one: West Antarctic ice shelves lost ice during the entire observation period. And during the most recent decade the erosion of ice there has been accelerating. The image at the top of this post portrays the speed of the Pine Island Glacier in West Antarctica. The pink coloring is indicative of the fastest speeds, and the blue represents stable ice on either side of the glacier. Based on radar data from the Sentinel-1 Mission of the European Space Agency (ESA), the image shows that parts of the Pine Island glacier flowed about 100 meters (328 feet) toward the sea between March 3 and 15 of this year. According to the space agency:

Pine Island is the largest glacier in the West Antarctic Ice Sheet and one of the fastest ice streams on the continent, with an average of over 4 km per year. About a tenth of the ice sheet drains out to the sea by way of this glacier.

Last year, research offered strong evidence that melting of the massive West Antarctic Ice Sheet — which the Pine Island Glacier helps drain — has passed the point of no return. If true, this means it is now in irreversible retreat and will “collapse,” as scientists put it, over the course of 200 years, give or take. Here's how I described the situation in an earlier post here at ImaGeo:

As the ice tumbled into the sea and melted, such a scenario would eventually raise sea level by 16 feet. That’s enough to swamp coastal areas where many tens of millions of people live worldwide. Luckily, however, the time frame is long — if not from a geologic perspective, certainly from a societal one.

I also noted other worrisome research:

. . . new research has suggested that the melt rate of glaciers in West Antarctica has tripled during the last decade. And another study attempts to show why: According to the research, over the past 40 years, a deep mass of water ringing Antarctica called the Circumpolar Deep Water appears to have warmed. The research also shows that warming CDW waters are intruding more and more to the undersides of glaciers that drain the West Antarctic Ice Sheet, causing them to melt from below, and speeding their passage toward the sea.

The Pine Island Glacier has been called the "weak underbelly" of the West Antarctic Ice Sheet. Like other glaciers in the region, it is fringed by an ice shelf — that has been steadily eroding. Here's a NASA video that explains how warm water circulating under the ice shelf at its outlet is helping to melt it from below: https://youtu.be/S3yZ8sBVlww Between November 9 and 11, 2013, a gargantuan iceberg broke off the calving front of the Pine Island Glacier. Here's an image of what that looked like from space:

An ice berg breaks free of the Pine Island Glacier in West Antarctica, as seen in this image acquired by the Landsat 8 satellite on Nov. 13, 2013. (Source: Earth Observatory) It's impossible to judge scale simply by looking at this image. So consider this: That chunk of ice is more than twice as large as the Island of Manhattan (and about the size of the island nation of Singapore). Click here for a wider view of the iceberg from November 10, just after the separation.