Antarctic Ice Sheet Has Collapsed Before, and Looks Likely to Collapse Again 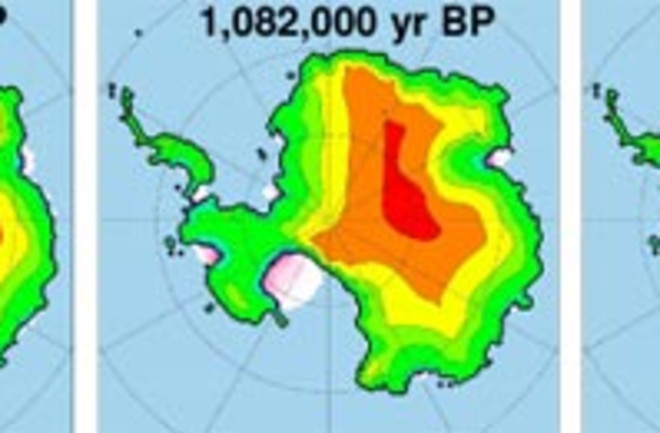 A massive chunk of the Antarctic ice sheet seems destined to melt away due to global warming, raising sea levels dramatically. But the good news is, the process will take thousands of years. Those are the conclusions reached by two studies of the West Antarctic ice sheet, which can be considered

the planet's Achilles' heel. It holds a vast amount of water, locked up as ice, and it's sitting below sea level, so it's inherently unstable [NPR].

By studying sediment samples from millions of years ago, researchers determined that the ice shelf has collapsed many times in the past, when warmer climate phases boosted ocean temperatures. With that historical data, another set of researchers simulated past and future changes to the West Antarctic ice sheet, and found that it

could indeed begin to collapse sometime in the next century or so if nearby ocean temperatures increase roughly 5°C--a possibility if current warming trends continue. If that warming occurs, the sheet could totally collapse in a few thousand years but contribute to sea-level rise much sooner [ScienceNOW Daily News].

In the study of core samples, published in Nature, the research team

examined a pristine drill core from sediment below the sea bottom near the ice. In the part of the core that dates back from about 5 million to 3 million years ago, when temperatures and greenhouse gas levels were somewhat higher than they are today, the group found evidence of multiple, 40,000-year cycles of melting and refreezing [ScienceNOW Daily News].

The drastic changes are triggered when warmer ocean waters melt the floating ice shelves around the edges of West Antarctica.

These floating ice shelves act like buttresses to keep the much larger ice sheet pinned back. And whenever the shelves melt away, the ice behind them flows into the sea and sea levels rise [NPR].

While the modeling study, also published in Nature, may present a long timeline for the collapse of the ice sheet and the resulting deluge of coastal lands around the globe, study coauthor Ross Powell says the results don't lessen the urgent need to confront global warming.

"Even if it might take a thousand years or more for the West Antarctic Ice Sheet to disappear, the melting before then could be significant enough that humans should really be taking note ... as we worry about our future generations," Powell said.... Today, even a partial melt-off raising sea levels by 4 feet would put at risk an estimated half a billion people who live along shorelines [Chicago Tribune].