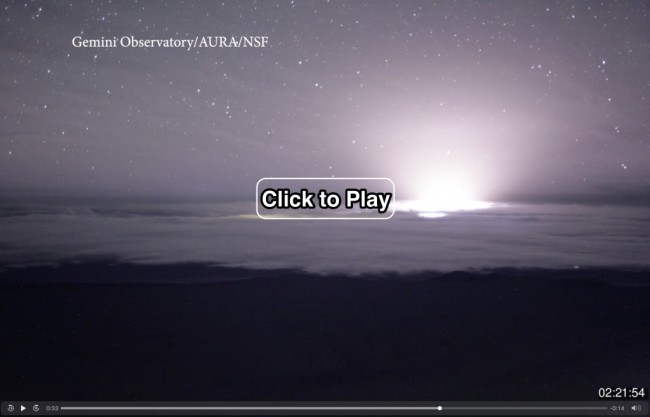 Time-lapse video acquired by the Gemini North telescope cloud camera on the night of May 21/22 shows the glow from volcanic activity on the Big Island of Hawaii. (Source: Gemini Observatory/AURA/NSF) Last week I featured time-lapse video capturing the ash plume from Hawaii’s Kilauea volcano exploding skyward higher than Mt. Everest. Now, the same camera, located on the Gemini North telescope atop 13,803-foot Mauna Kea, has captured yet another remarkable video. The new time-lapse shows the intense glow from an extensive region of volcanic fissures on Hawaii's Big Island. As described in a release from the Gemini Observatory:

During the sequence, multiple fissures expelled lava in the area in and around Leilani Estates in the Puna district of the Big Island of Hawai‘i. The lava also flowed into the ocean during the period of the video.

The camera is located about 40 miles away from the eruptions. It’s ordinarily used to monitor the sky so that telescope operations can be handled remotely. The view is eastward, toward the town of Hilo, which is under the cloud deck roughly at center. According to the observatory release:

The moon illuminates the landscape early in the sequence. Later, the setting moon (behind the camera) casts shadows of Gemini and several Mauna Kea observatories as well as a projection of the mountain onto the atmosphere.

As I'm writing this on Tuesday evening, sulfur dioxide is reported to be spewing from the fissures in Leilani Estate area. And this morning, the Kilauea's summit volcano erupted once again.