Another month, yet another record low for Arctic sea ice 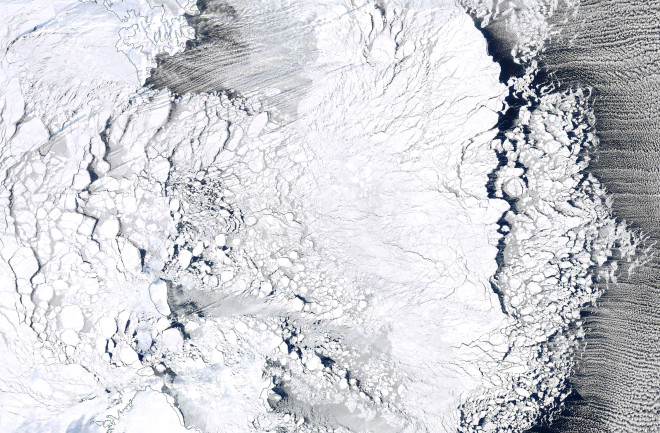 The edge of Arctic sea ice in the Barents Sea between Svalbard and Novaya Zemlya, as seen by NASA's Terra satellite on April 2, 2017. (Source: NASA Worldview) Finally! Some relief from the unrelenting decay in Arctic sea ice. Well, no. I was hoping to be able to report that. But I can't. The National Snow and Ice Data Center's most recent update shows the extent of Arctic sea ice in March dropping to a record low for the month. And that marks the sixth month in a row of record-setting lows. On March 7, the extent of Arctic sea ice seems to have reached its maximum extent for the year, after an entire winter of frigid temperatures. But here too, there was no good news to report: that maximum extent also was noteworthy for being the lowest in the 38-year satellite record. And this is the fourth year in a row that this particular record has been broken. "The strange seems to be the everyday up there now," says Mark Serreze, the NSIDC director. Arctic sea ice extent for March 2017 averaged 452,000 square miles below the January 1981 to 2010 long-term average. To help put this into perspective, that 452,000 square miles of anomalously open, unfrozen water is nearly three times the size of California. https://twitter.com/ZLabe/status/851870553191268352 The animated graph above shows what the trend for March looks like since the start of satellite monitoring in 1978. And there are similar trend lines for all months of the year. In fact, since the late 20^th century, the decline in summer Arctic sea ice has been so steep that it appears to be unprecedented for the past 1,450 years. "We’re losing the sea ice,” Serreze says. He predicts that continued human-caused warming will leave the Arctic with no significant sea ice cover during summer in little more than a decade. Why should we care about what's happening in the Arctic? Suffice it to say that what happens in the Arctic doesn't stay there. Research published just this past March links extreme weather in the middle latitudes, where much of the world's population lives, to the dramatic withering away of sea ice, and the amplified warming that this is associated with. The vagaries of Arctic weather can have a big impact on the sea ice, even in summer. So it's not possible to make a firm prediction of whether Arctic sea ice at the end of the warm season in September will set the record for lowest overall extent. But it's not looking good. In addition to the geographic coverage of the ice being extraordinarily low, so is the overall volume. According to one estimate, made using observations and computer modeling, that volume is currently at a record low as well. That does not bode well for the fate of sea ice during the coming summer.