Animation of true- and false-color satellite images of the Lake Fire burning east of Los Angeles. (Source: NASA Worldview) A wildfire covering an area more than half the size of Manhattan Island is burning out of control in the San Bernardino National Forest east of Los Angeles. As I write this on Friday morning (June 19), it has scorched 11,000 acres and is only 10 percent contained, according to InciWeb, the federal incident information system. The cause of the blaze, called the Lake Fire, has yet to be determined. It threatens 150 structures; none are believed to be damaged so far. California's epic drought has raised fears that this fire season could be very serious. The Lake Fire is the biggest wildfire in California so far this year. I created the animation above using images of the blaze and surrounding area acquired by NASA's Aqua satellite on Thursday, June 18, 2015. The false-color image emphasizes the area of active burning in orange colors. The true-color images clearly shows a giant smoke plume. 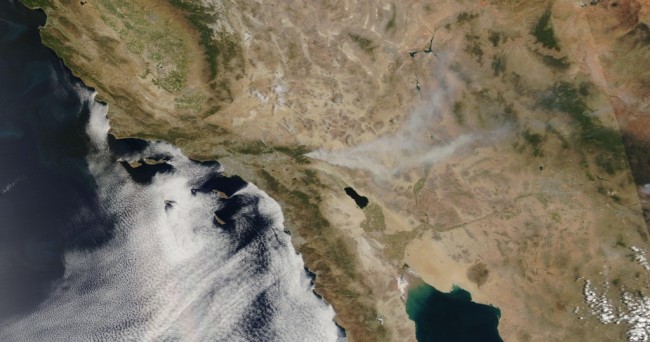 A broad view of the southwestern United States and parts of Mexico, acquired Thursday, June 18, 2015, by NASA's Aqua satellite. (Source: NASA Worldview) As the broader view above shows, that smoke plume extends a very long distance across the southwestern United States. The plume seems to have two forks. The northerly one extends up to Lake Mead near Las Vegas, about 250 miles away. At its farthest, wispiest extent, the southerly fork of the plume runs about 300 miles to the east — by my reckoning, all the way to Sedona, Arizona. Next is an animation of GOES-West weather satellite images:

Animation of GOES weather satellite images covering Southern California from San Diego to Los Angeles. (Images: NOAA. Animation: Tom Yulsman) Note the prominent black spot east of the Southern California coast in the first half of the animation. These are infrared images acquired by the satellite at night, and the black spot is indicative of heat from the Lake Fire. After sunrise the images switch to visible light — and the smoke plume from the fire becomes dramatically evident.

#LakeFire Update: Blaze grew to 11,000 acres burned by this AM, however it's now 10% contained http://t.co/Gs25nKon9zpic.twitter.com/7CWRjE0JwG

Lastly, the photo in the Tweet above from NBC Los Angeles shows what the fire looks like from a helicopter. I'll be keeping an eye on the Lake Fire, including watching for imagery from today's passes over the region by NASA's Terra and Aqua satellites. So make sure to check back for any updates.