An Arctic Lab Buried in Ice

Scientists camp under a shrinking glacier in Norway to study its health and the life within it. 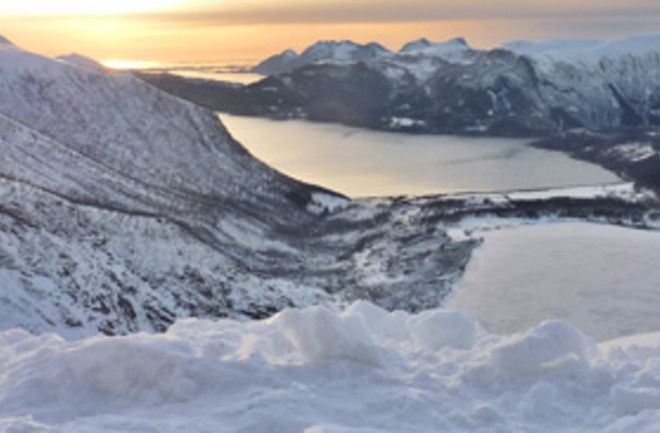 A snowy view from the entrance of the Svartisen Subglacial Laboratory. | Photo courtesy of Miriam Jackson/Halfdan Benjaminsen/NVE

Glaciologist Miriam Jackson makes a long, scenic commute to her Norwegian lab. After an hour-and-a-half flight from Oslo to Bodø, she drives two and a half hours to a fjord, hitches a ferry ride across it, and hikes nearly five hours up a snow-covered mountain. Finally, she opens a door on the side of a rocky outcrop and enters the Svartisen Subglacial Laboratory, a research center buried under 650 feet of ice.

The laboratory, carved out of the rock itself, hosts a range of research analyzing the overlying Engabreen glacier. Some researchers there monitor the glacier’s health; it has been shrinking steadily since 1999. Others study extreme life-forms. David Cullen, a biotechnologist from Cranfield University in England, recently tested sensors designed to identify microbes embedded in the ice by searching for cell-wall molecules and small snippets of DNA. His devices have turned up bacteria, fungi, and microorganisms known as archaea on the spot. He hopes that in 2018 some of his sensors will do the same job on the Red Planet, as a component of the European Space Agency’s ExoMars rover.

Things get otherworldly at the rear of the lab, where the researchers create temporary caves of dirty blue and black ice by blasting through an exposed ice wall with hot water for at least 24 hours. Dirt and stones rain down on the scientists as the cave ceiling slowly melts, and the crushing pressure of the glacier overhead generates an unnerving crackling. “It does sound a little scary,” Jackson says, “but it’s quite beautiful.”

CHECKING VITAL SIGNS A researcher drills a hole through the snow and ice to set up a GPS receiver. The device measures the surface movement of the ice sheet, a key diagnostic tool for monitoring the Engabreen glacier.

EAT, SLEEP, AND SHIVERThe scientists take residence in a carved-out tunnel with eight bunk beds, a bathroom with a shower, and a kitchen. Their food stays fresh in a freezer that is also used to store ice samples.

HOLDING BACK THE ICEThe end of the tunnel, strewn with tools and cables, leads to ice that the scientists melt to form a temporary cave. When the cave is not in use, the ice is sealed off with steel shutters to prevent it from oozing out.

CARVING OUT A PASSAGEBiotechnologist David Cullen holds the hot-water hose used to carve the ice cave. Researchers can access the cave for only a couple of days before the ice closes in and the cave disappears.