During any given week, most articles on genetically modified organisms (GMOs) follow a simplistic and/or sensationalistic storyline. For example, here's last week's cover story in The Village Voice: 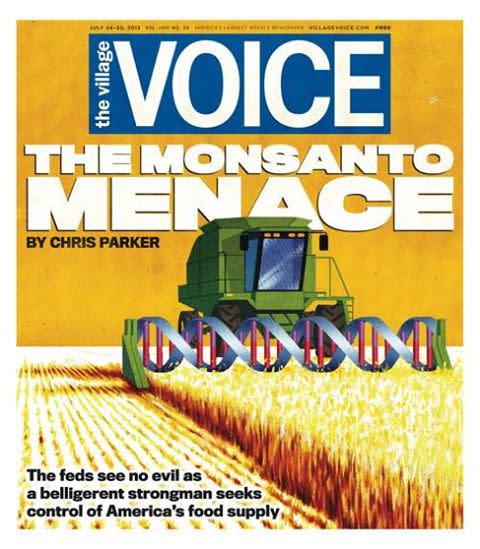 The Monsanto-Is-Evil theme is a media staple, as is the GMO-Foods-Are-Dangerous theme, of which magazines like

are piggybacking on. (I recently discussed the latter example). Too often urban myths are recycled credulously and coverage is botched altogether. That's why Amy Harmon's absorbing New York Timesstory on GMO oranges has been widely praised by many scientists and science journalists. Her long feature is a breath of fresh air on a complex, politicized subject that has been frequently distorted in the media by agenda-driven activists and their influential enablers (who should know better). Another much needed corrective to this sad state of affairs is the thoughtful (and ongoing) series of posts by Nathanael Johnson at Grist. This is uncharted (and probably uncomfortable) territory for Grist, given it's prior coverage of GMOs, so it will be interesting to see where Johnson's in-depth exploration of agricultural biotechnology leads him. These are promising developments on the biotech beat--a welcome break from the canned GMO storylines playing out in the media on a daily basis. A final note on Harmon's story. It has inspired two posts over at MIT's Tracker, an unreservedly laudatory one by Charlie Petit, and one with qualified praise from Paul Raeburn, who has a few quibbles that I don't share. Actually, there is one thing that Raeburn mentions that I too found odd: the numerous unnamed quotes. This puzzled me because there didn't seem to be anything about the quotes that would warrant anonymity and usually when a source goes unnamed, it's made clear why in the story. Raeburn speculates: "The only thing I can think of to explain this frequent use of anonymous quotes is that Harmon and her editor wanted to keep the light" on the protagonist in the story, "putting others into soft focus in the background." The decision to frame the narrative around Ricke Kress, the Florida executive who is obsessed with saving the orange industry from a horrible blight, seemed smart to me. But Raeburn thinks that made the piece one-sided: "The problem with the story is that we see far too much through Kress's eyes." He goes on to explain that it would have been nice to hear from other parties, such as several of the pertinent regulatory agencies, critics of biotechnology, and even Monsanto, which has nothing to do with the GMO orange initiative but is mentioned periodically in the story because of its outsized role in the larger biotech debate. Raeburn wonders: Why doesn't Harmon give the company a chance to respond to how it is characterized? But doing all this makes for a different kind of story that Harmon crafted. To me, the piece is so compelling because we're seeing it through Kress's eyes. Diverting too much away from him would have disrupted the rhythm of the narrative. And it's not as if Harmon doesn't sketch out the broad outlines of where the science stands on GMOs and the political controversies muddying the public debate over it. She does all this very well, in fact. Raeburn concludes (my emphasis):

Harmon's piece is unlike anything else I've read on genetically engineered foods, and it does advance the argument, by showing that, in this case, refusing to adopt genetically engineered orange trees might mean wiping out the nation's citrus crop. Choices have consequences. My aim here is not to wade through the arguments for and against the genetic engineering of food, but to get into the journalism, into the guts of the story, to see how Harmon did it--and what she might have done differently.

Indeed, Harmon's aim for her story was not to wade through the pro/con GMO arguments, but to open a new window onto a complicated subject. She more than succeeded. UPDATE: After writing this post, I noticed that Harmon responded via Twitter to some of Raeburn's criticism:

.@KSJTracker I try to use power of parciular narrative to tell larger story. Random quotes frm critics with whom Kress had no contact? Why? — Amy Harmon (@amy_harmon) July 31, 2013