Oceanography and paleontology work recently uncovered the mysterious disappearance of most sharks in the ocean millions of years ago. These ocean predators are facing another decline today. 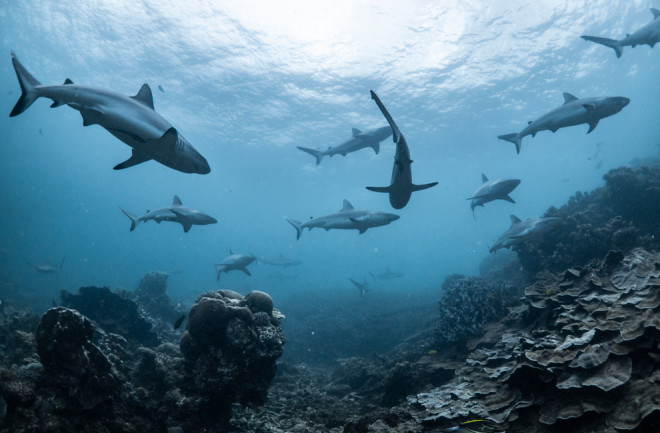 Through many of Earth’s mass extinction events, these finned predators have endured. The K–T extinction that annihilated the dinosaurs only wiped out about 30 percent of sharks.

But a study published in Science this June investigated the denticles that sharks leave behind and found something rather shocking. About 19 million years ago, sharks had an extinction event of their own. Over 70 percent of the pelagic, or open-water, shark species disappeared, and their abundance dropped by 90 percent. There’s no clear answer as to why.

Clues In a Coat of Teeth

When we think of fossil sharks, explains Yale oceanographer and paleontologist Elizabeth Sibert, we tend to think of their teeth. But sharks are odd fish. “They’re completely covered in modified teeth. Or, perhaps their teeth are modified scales,” she says. “Either way is really cool. And they shed scales the same way they shed teeth.” Those small scales, called denticles, are also extremely hard to find, despite shedding in much greater numbers than regular teeth. But Sibert has a background spent hunting down tiny fossilized foraminiferida, a single-celled marine organism, which prepared her well for hunting these microfossils from sharks.

Sibert spent her dissertation examining the K–T extinction, trying to establish a baseline of shark population to find out if their drop during that event was a true drop, or just the normal population variation that happens over time. She found a spot in the South Pacific Gyre where she could take contiguous sediment cores for the last 80 million years, undisturbed by plate tectonics.

She found that before the K–T, the ratio of sharks to fish in the oceans was about 1:1. After, it went to 1:5. “That [ratio] stayed at 1:5 for the next 40 million years, which is a long, long time. Until 19 million years ago, when sharks dropped off a cliff.” It was a shock: There were no major climatic events to point to as a cause.

Clearly something had happened. But what, exactly? And what was the magnitude of it?

That’s when her co-author, Leah Rubin, got involved. Then an undergraduate student, she’d never dreamed of studying paleontology, or sharks. She was interested in fisheries and marine mammals. But historical context matters a lot in conservation ecology. “I always loved how different parts of animals can give us a sense of their life history: whale earwax, walrus tusks,” she says. “Then I met Elizabeth, and she brought that context back millions of years.”

The task ahead was enormous, Sibert says. “A joke about vertebrate paleontology: Most people can get a paper from one specimen. I had to get 1,400 specimens into my paper to make it worthwhile.”

Sibert knew about the extinction, but “my job was characterizing what it looked like,” Rubin says. “Create a code for distinguishing denticles, grouping, try to figure out who these sharks were that died.” An undergrad at a different college, Rubin spent her summer and winter breaks working on the project until she could incorporate it into her coursework.

They spent years examining over 1,000 denticles, trying to sort them by morphological characteristics. In the end, they found about 85 different morphological types, though Rubin added that the analysis of the denticles is still a work in progress.

While we don’t know what shark diversity looked like precisely before this event, she says, we do know that “there were about 10 times more morphotypes of scales in the ocean before this event, than today,” Sibert says. As for the denticles themselves, they tell a murky story. Broadly, they found two types of denticles: linear and geometric.

Geometric denticles are largely found on small, deep-sea sharks, like the cookie cutter or lantern shark. Large, mobile sharks like great whites or bull sharks tend to have linear denticles. “So perhaps something happened where it got a lot harder to be a shark if you were living in one small space in the open ocean, in a way that living in the open ocean and moving around a lot more was a lot easier,” she says.

But geometric denticles, for one thing, appear to be a derived characteristic, not an ancestral one. They’ve appeared multiple times, so their evolutionary role is less obvious. Plus, most small, deep-sea sharks have linear denticles. So the role of either type in an environment or in support of a lifestyle is unclear. “I’m working with colleagues who do genetics and bio-design,” she says, “trying to figure out the biodynamic properties of denticles and underlying genetics to figure out more about what they would’ve been like.”

The Lessons of Extinction

Whatever the cause, it’s an event from which the pelagic sharks never recovered. We’ll likely never know what many of those ancestral sharks were like: how they appeared, or how they survived. And modern sharks face another threat.

Over one-third of Condricthyans — the family that includes sharks, rays and chimeras — are threatened by overfishing, habitat loss, climate change and pollution. "The current state of declining shark populations is certainly cause for concern,” Rubin says, “and this paper helps put these declines in the context of shark populations through the last ~40 million years. This context is a vital first step in understanding what repercussions may follow dramatic declines in these top marine predators in modern times."

It may also add to our understanding of Earth’s climate history. About 30 years ago, some very careful paleobiologists were counting abundance and diversity of single-celled organisms called benthic forams over time, Sibert says. Suddenly, 56 million years ago, 50 percent of them went extinct. Nothing obvious was happening climatically.

“Interesting thing about biology: It doesn’t reverse itself,” she says. “The carbon cycle goes up and down all the time. But stuff that goes extinct, just goes extinct.” So the biologists got the climatologists to dig deeper, eventually down to 5,000 year intervals. There they found the periods of massive warming and cooling now known as the Paleocene-Eocene Thermal Maximum.

The benthic forams were the canary in the coal mine, and so too may be the sharks 19 million years ago, Sibert says. “I think they’re trying to tell us something happened here.”