If you're a yellow perch or a walleye, native to the Great Lakes, the last fifty years have been something out of War of the Worlds, Invasion of the Body Snatchers, Earth Girls Are Easy et al. Strange alien species fiercer than their American and Canadian counterparts, like the Eurasian ruffe, have been arriving out of nowhere, taking your food, ruining your habitat. If you're a smallmouth bass, the distinctly unattractive round goby, pictured below, eats your egg nests. As a result, humans in the area are suffering about $200 million worth of ecological damage every year, a new study says. 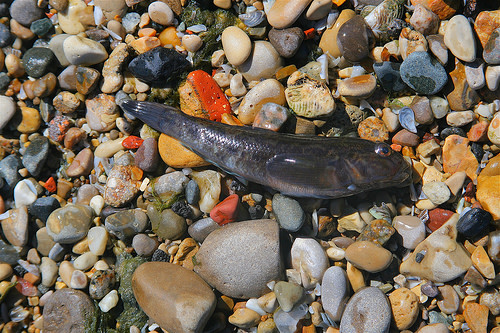 This is a matter of ocean vessels accidentally dragging species from far away into the lakes through their ballast water. A big chunk of the estimated annual loss, $123.6 million, comes from the loss of recreational fishing money—those hobbyists love the bass. Which brings us to tourism as an important economic argument enviros can deploy. People don't come to your lake if all it has in it is fugly nest-eaters like this guy, and people don't come to your lake if it has toxic sludge in it. Those "green-collar jobs" everbody's talking about? In a sense we've already got a lot of them. Despite fuel procies, tourism continues to be one of the biggest industries in places like my own California. Fine, argue that a fish doesn't matter as much as a fisherman's job, or an owl doesn't matter as much as a logger's job, but by that logic a tour guide's job or a waiter's job surely count for something.